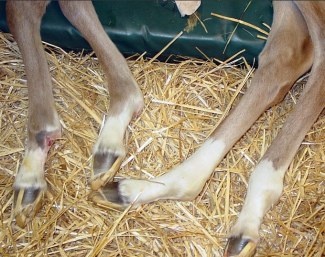 When I bred one of my proven broodmares with stellar bloodlines to a top European stallion last year, never in my wildest dreams would I have been able to predict what was to happen.

My mare was due in March and I was fortunately present to witness the birth of a colt which appeared normal, but the mare retained the placenta, a first for her. Initially the foal appeared bright, alert, had good suck reflex and was very vocal. But something was wrong.

The first thing I noticed was his lax front pasterns. Then while trying to stand up his skin started to tear on contact with the straw bedding. Our vet came and we milked the mare and tubed a pint of colostrum into him. But after two hours his legs were still like jelly almost bending the joints backwards.  Both my veterinarian and I were baffled as to what was wrong so we rushed him to Texas A & M.

While some things were normal, like his respiration and temperature, some of A & M’s notable findings were the following: “The colt had full thickness abrasions/lacerations on all four fetlocks, and his limbs were hypothermic. The coronary bands and mucous membranes were hyperemic and his sclera were severely injected bilaterally. The cartilage within the ears and the nose appeared underdeveloped.”

Then his skin started to fall off in their hands, they told me. These results led them to test for genetic defects and it turned out he had Warmblood Fragile Foal Syndrome, or WFFS.  My colt was then euthanized-- the only outcome for foals affected with this horrible disorder, as it is always fatal.

How did this happen, and where did it come from? It evidently only happens in the Warmblood breeds, hence its name. Research on WFFS revealed that “WFFS is an inherited autosomal disorder caused by a single mutation in lysyl hydroxylase 1 (LHl) gene,” according to the website of the U.S. company Animal Genetics, that has offices scattered around Europe and who test for this disorder. It goes on to say, “WFFS is an autosomal recessive trait, meaning a foal can only be affected if the foal inherits the disease from both parents. Parents that are carriers do not have any symptoms associated with WFFS. However, they will pass on a copy of the defective gene to their offspring 50% of the time. If breeding two carriers the foal has a 25% chance of being affected and a 50% chance of being a carrier.”

It is very rare to have a live foal with the syndrome, the theory  being most are aborted with genetic defects, or wrongly diagnosed – as mine was, initially – as being dysmature. Even more unlikely is that the dead foal will be DNS tested for WFFS, as the owner is in sticker shock from the cost of trying to save them.

Upon discussing the situation with the president of the U.S. division of Animal Genetics, Arne Dekloet, he confirmed that the number of tests they do in the U.S. for WFFS are very low compared to their offices in Europe. That would make sense given the population of Warmbloods is much higher in Europe and that’s where of course the breeds originated. “Here [in the U.S.] the problem is awareness in the Warmblood community,” he said. And he also confirmed that all tests they perform remain confidential at the company.

As a responsible breeder, I collected hair samples of all my broodmares and sent them to Animal Genetics for testing. Fortunately, none of my mares carry this LHl gene other than the mother of my infected foal. Since the testing costs a mere $55, I urge breeders to consider having your breeding stock tested for this inherited condition. And to stallion owners, I also urge you to do the responsible thing and test all your stallions.

I’m thrilled to recently see Hilltop Farm’s announcement of their preemptive move to test all their standing stallions for WFFS. It is, however, unfortunate to hear that Sternlicht is a carrier. They further announced they are removing him from their stallion roster. So thank you, Hilltop, for setting an example and doing the ethical thing for breeders in North America.

Does this open a can of worms with bloodlines and our breed registries? It most likely does. But if we can avoid more heartbreaking births of foals with WFFS like the one I just experienced, I believe it will all be worth it. I have been contacted by people, and seen posts on the FB threads, who postulate that the many of the genetic diseases found across the breeds involve connective tissue problems. Another stated that the gene PLOD1 involved in WFFS can cause arterial rupture in adults with Elhers-Danlos, another connective tissue disease in humans. DSLD, a big concern right now, is also a disease of connective tissue.

Hopefully advances in gene testing will help us to unravel these questions in the future, but for now I would urge all breeders to test – knowledge is power.

Mary is a British Horse Society Instructor,  USDF silver medalist and breeder of dressage horses in Conroe, Texas at her Southernwood Farm. Originally from the U.K, she moved here in 2000, after teaching and riding all over the world with her husband who works in the oil industry. She continues to teach, promotes US riders on her young horses, and breeds 4-6 warmbloods a year.