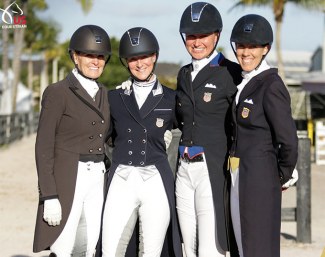 The all-female American team dominated the FEI Nations Cup™ CDIO3* team competition in the 12th and final week of the 2018 Global Dressage Festival (GDF) in Wellington, Florida. In the first leg of the 2018 FEI Nations Cup series, the USA romped home with gold, while last year’s winners, Canada, clinched silver and Australia took a historic bronze — the first time the nation has ever won a dressage Nations Cup medal of any color. Spain finished fourth.

Unlike some other stages of this worldwide seven-leg Nations Cup series, teams at AGDF can be made up of big tour, small tour, or a mixture of big and small tour combinations. In order to level the playing field, 1.5% is added to each grand prix score, with the small tour results remaining unaltered. Teams consist of three or four riders, with the best three scores from day one and the best three from day two determining the final results.

Adrienne Lyle and Salvino posted personal best scores in both the grand prix and the special tests, culminating in 76.894% (78.394% after adjustment) in the special, a huge new best for the pair. A team from the USA has won six of the seven Nations Cup contests held at AGDF.

“This is an incredible event to be part of,” said Lyle, who was riding Elizabeth ‘Betsy’ Juliano’s superb 11-year-old Sandro Hit stallion, Salvino. “I’m so proud of my boy, putting two really solid, clean, powerful tests in for our team. He was a little tired today, but came out fighting — and that’s what you want.”

“I could not be more happy with my horse in our first season of grand prix,” said the German-born rider who is now based in California. “It was really good practice to ride in another climate and see what your horse gives you. I’m super happy and look forward to the future.”

LaGoy-Weltz added more power to both her performances with Lonoir, and as a result ended up with a couple of small mistakes.

“Nothing ventured, nothing gained,” she said. “There were still some bobbles, but when you go for more powerful, it can cause other things to happen. Then again, taking risks is how you make progress.”

Despite two solid performances on Diane Fellows’ inexperienced mare Havanna 145, Ashley Holzer was the drop score. An error of course meant a costly 2% deducted from her grand prix special score, and prompted a teasing text from Fellows to Holzer that read: “Which test did you prefer — yours of the FEI’s? Don’t worry; it’s about the big picture.”

Holzer added: “Nobody will beat me up about that mistake more than myself. My mare was a little green this week, but luckily my team-mates said, ‘Don’t worry, we’re all human’. They’re amazing girls and I’m very honored that everyone in the States has been so welcoming [since switching nationalities from Canadian].”

American Nations Cup team chef d’equipe, Robert Dover, added: “Since the inception of the AGDF, this show has been a dream come true. I’ve watched the state of both American dressage — and all the countries that are here — rise up because of this amazing venue and the shows put on here. It’s fantastic what it’s done for the sport.”

Of his team, he added: “I’m so proud of these amazing women who are not only rising to the occasion but they are changing the game for American dressage as we go towards the [World Equestrian] Games. Of course that wouldn’t be happening if it weren’t for incredible people like [trainer] Debbie McDonald and [owner] Betsy Juliano, to whom we owe so much — and so many more people.”

Spearheading the Canadian charge with a new best in the grand prix special test of 71.304% (72.649% after adjustment) was Brittany Fraser and her 13-year-old powerhouse by Tango, All In, who has blossomed during GDF 2018.

“I had a personal best today,” she said. “We still had a mistake in the ones — but I’ll fix that tomorrow in the freestyle! I was proud of All In today; he was tired, but he tried.”

Fraser’s team-mate Megan Lane had double cause for celebration. Not only did she help Canada to team silver riding Caravella, but she also won the Grand Prix CDI3*, presented by Grand Prix Services (for special) on Zodiac MW. The Canadian team was rounded out by Jill Irving (Degas 12) and Diane Creech (Chrevis Christo).

The bronze-medal winners, Australia, were delighted with their historic result. Small tour rider Kelly Layne (Furst Amante) said: “Australia is a very, very long way from here and to put a team together is not so easy. This GDF competition series is something we could never even imagine; it’s brought us here and, over the years, helped improve our performances. I’m so happy we could do it this year — and put ourselves in a bronze medal position. My horse is really green, but really fancy. He was with me the whole ride and the little mistakes were completely mine.”

Juan Matute Guimon and Don Diego, by Don Frederico, capture the under-25 grand prix with 71.669% — adding to their inter II victory. “His performance today was quite good, apart from a mistake in the twos,” said the self-confessed perfectionist. “Once again, his overall attitude was quite competitive and fresh. We were indoors today, which I think helped. He’s a dark horse so he doesn’t have so much stamina; I think being indoors really benefited him.”

The 20-year-old flies to Europe at the end of April for the Segovia CDI before heading to the Spanish national championships in a bid for a place on his nation’s team for the FEI World Equestrian Games in Tryon, North Carolina, in September. Failing that, his goal will be the under-25 FEI European Championships.

Molly Paris improved on her score from the inter II to scoop silver for the USA. She rode her own 16-year-old mare Countess to 68.508%, edging out Spain’s Rodrigo Encinas Fuentes on Van The Man (67.778%).

“I enjoyed that test more than in I-2,” said Paris. “Countess has strong passage and piaffe and I really like to showcase it. She’s not the easiest, but once you get her going, she’s brilliant.”

Encinas Fuentes said: “Van The Man has been the horse that’s taught me how to ride a grand prix and compete at a high level. He’s a very competitive horse; every time he goes in the ring he proves it and wants to give everything.”

The USA’s Sarah Daehnert rode just one CDI test this week, but she capitalized on it, winning the Prix St Georges CDI1* on her own and Robert Price’s nine-year-old Vivaldi x Jazz gelding, Evander. Their 70.784% marked a giant improvement from their one and only other showing, a month ago, where they scored 65.8%.