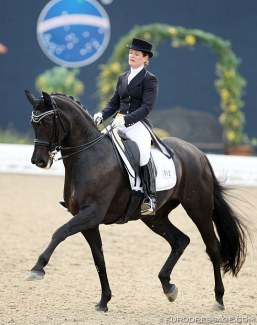 Swedish Grand Prix rider Paulinda Friberg will not be competing Di Lapponia T in the world cup qualifier at the 2018 CDI-W Gothenburg on Thursday 22 February 2018. The 44-year old has injured herself and is on crutches.

This week a horse severely stepped on Paulinda's foot and she was brought to the emergency room. Paulinda told Ridsport that the foot is not broken but the soft parts are damaged and it was put in a cast.

Friberg and her 17-year old Hanoverian mare Di Lapponia T (by Donnerhall x Argument) have been competing at international Grand Prix level since 2013. Their career highlight so far was the 2015 World Cup Finals in Las Vegas where they finished 14th in the Kur with 71.000%.

This is the second time that Friberg has injured herself in a riding accident. In June 2014 she fell off a young horse, got kicked in the stomach and landed in the intensive care unit.

Friberg was one of seven riders competing at the 2018 CDI-W Gothenburg this weekend.