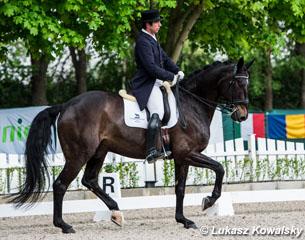 Aboard the 12-year old Oldenburg gelding Rasputin (by Rubin Royal x Sandro Hit), Robert Acs was member of the Hungarian team that competed at the 2017 European Championships in Gothenburg, Sweden. Acs began competing the dark bay at Grand Prix level in the spring of 2016.

Rasputin has been sold to an amateur rider in Switzerland as a Grand Prix schoolmaster. 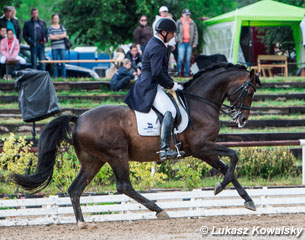 The horse made its international show debut in 2015 under junior rider Esther Kotton and moved into training with Acs in 2016.  Robert and Flash Dancer IM first showed at small tour level in 2016. They won the CDI Samorin amongst high placings at two more internationals. They moved up to Grand Prix in April 2017 at the their home show in Mariakalnok and contested the CDI's in Lipica and Brno.

Flash Dancer IM has been sold to Dressage Grand Ducal in Luxembourg.

Acs will continue his Grand Prix career with the 9-year old Sol de Espana OLD (by Fidertanz x De Niro), which he has shown as small tour level from 2015 through 2017.