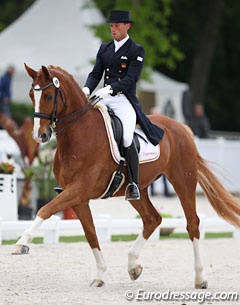 The chestnut Equestricons Lagerfeld K (by Londontime out of Donna Pia (by Don Crusador)) is bred by Frank Guenger and was owned by Jochen Arl.

Under Spanish Olympic team reserve rider Borja Carrascosa, Lagerfeld K made his international show debut at small tour level at the 2017 CDI Saumur in April. The horse twice scored over seventy percent to place second and third. Carrascosa also competed the talented gelding at the 2017 CDIO Compiègne before Belgian junior rider Antonia Arl took over. She won the junior team test at the 2017 CDI Achleiten with 71.036% and went on to place third at the CDI Pompadour in June.

At the beginning of November Capellmann acquired the Farbenfroh lookalike as a potential Tokyo Olympic ride. The gelding moved to Wurselen on 10 November. 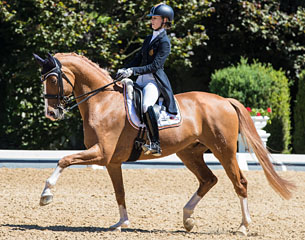 The gelding was previously competed by Arl's American stable jockey Kya Anderson, who rode him to victory in several national classes at the 2017 Global Dressage Festival in Wellington. Right after the Florida season, Waitoni sold to Capellmann. 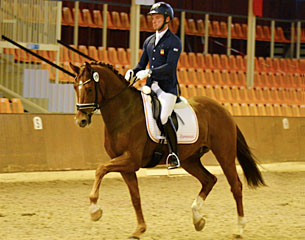 Nadine has put Waitoni in training with Borja Carrascosa who is preparing the horse for FEI level. At the 2017 CDN Ankum in October, the new duo won the M-level class with a whopping 79%.