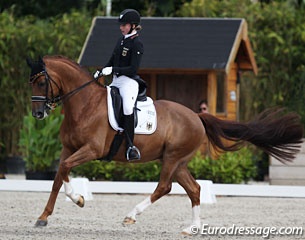 Rebecca Horstmann has put the German team in the lead of nations ranking by being the high scorer on day one of the 2017 European Junior Riders Championships held in Roosendaal, The Netherlands, on Wednesday 9 August 2017. Topping the board after the first group of riders going in the team championship test, Horstmann scored 72.703 to edge out Grecian individual rider Theodora Livanos and Dutch Thalia Rockx.

The 2017 European Children, Junior and Young Riders Championships kicked off today in beautiful weather conditions at equestrian centre Den Goubergh. While the opening ceremony and vet check took place in the pouring rain, the first day of competition was blessed with more typical summer weather. Unfortunately the forecast for the rest of the week is less than bright with more rain on the way. It brings back memories (and trauma) of the deluge at the 2011 Europeans in Broholm.

Den Goubergh has made a good effort to clean up the main show ring. With gorgeous plants, sunflowers, wooden clogs, milk vessels, box trees and bamboo surrounding the rectangle, the main stadium gives a true Championship feel. The show organisation made the decision to have only one competition ring, which has put the show schedule into a total gridlock. With 33 children, 80 (!!) juniors and 66 young riders the competition goes on from dawn till night (under floodlight). The juniors and young riders had to be split up into two groups. On the first day, Wednesday 9 August, the first juniors and young riders competed in the team test. However, Thursday will be filled to the brim with tests: competition starts at 7 AM and will last until 10 PM with hardly any breaks! There is even no time for the team prize giving ceremony which has apparently been scheduled for Friday. The vast amount of riders is a good development in the sport, but it also begs to wonder if the Minimum Eligibility Standard needs to be raised to keep the Euro Championships more chewable and under control. 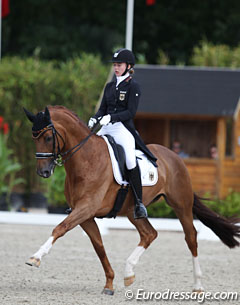 German team routiniers Rebecca Horstmann and her 9-year old Oldenburg bred Friend of Mine (by For Compliment x Rubinstein) became the high scorers of the day. The cute chestnut gelding halted square but not entirely straight. The horse has nice suspension in trot and executed a good rein back, but he tilted in the shoulder in right. The trot was nicely uphill oriented, but in the extensions he leant on the rider's hands. and could cover more ground. The walk pirouettes were small but the left one could have been a bit more active. Friend of Mine has a balanced canter and produced smooth changes. Overall the horse was steady in the contact, but could have been lighter in the bridle today. They scored 73.703% and ranked first with four judges, one had the pair third though the marks were quite in unison. 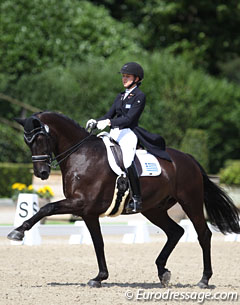 Swiss based Grecian Theodora Livanos has made a successful transition to junior riders level this year on the very experienced, 14-year old Dutch warmblood gelding Winston (by OO Seven x Cocktail) who was a long-time Dutch team member and medalist under Stephanie Kooijman. With Livanos, who is trained by Swiss Grand Prix rider Birgit Wientzek-Pläge, Winston is in prime form. The tall dark bay gelding looked fit, well muscled and up for the task. The pair had a wonderful halt at entry. The trot was well carried, with the horse obediently executing the voltes and half passes. The trot extensions were a highlight. Overall the poll could slightly have been higher. Winston dragged his feet in the rein back though. The horse's weakness is the walk and he hardly achieved any overstep in the extended walk (still score 6.5 - 7!). In the left turn on the haunches there was a momentary loss of impulsion. In canter Winston executed four wonderful flying changes but he added a fifith, unscripted change at the end of the extended canter. Livanos scored 71.865% to finish second. 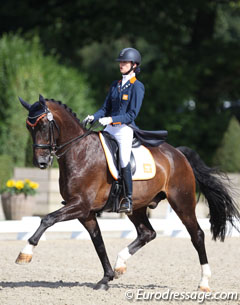 Dutch Thalia Rockx and the 15-year old home bred KWPN gelding Verdi de la Fazenda (by Florett As x Sandro Hit) dropped from Young Riders to Junior level in 2017 and succeeded in capturing a spot on the Dutch team. The pair finished third so far in the team test with 71.243%. Rockx, whose parents are Grand Prix riders Johan Rockx and Canadian Penny Zavitz-Rockx, showed solid riding in the trot. Her Grand Prix schoolmaster Verdi has no problems with the flow and ground cover in the trot voltes and half passes. The rein back was good, though the halt not square. The walk tour lacked some polish. The extended walk was limited in ground cover, the exit of the walk pirouette right was big and he jogged into trot instead of making clean transition from walk to trot. In canter, Verdi produced very good, secure flying changes and a very ground covering extended canter, though it was hurried.

Johanna Sieverding was the first German rider to go for her team and succeeded in her team debut, which moved her to tears at the end of the test. With her 8-year old Hanoverian mare Lady Danza (by Dimaggio x Rubin Royal). The chestnut mare trotted actively with much forward go. Although she could have more uphill tendency in general, the mare had huge flying changes and extended canter in store. In the walk she was secure in the clarity of the rhythm but got prancy in the collected walk. The pair scored 71.081% for a provisional fourth place. 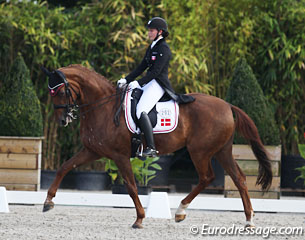 Danish Victoria Kuusisto Pedersen and Anna Kasprzak's 16-year old Danish mare Langkjaergaards Donna Fetti (by Don Schufro x World Cup) completed the provisional top five with a 70.649% score. The trot was lightfooted, executing the movements with much quietness and concentration. The trot extensions were quite conservative and in the shoulder in left she was a bit overbent. The liver chestnut mare showed excellent walk pirouettes and a well regulated collected walk. The mare showed four big flying changes though got crooked in the body before the third change. 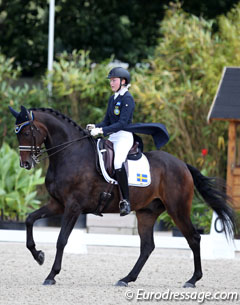 Team Germany is currently in the lead with 144.784 points, followed by The Netherlands with 141.351 points. Team Sweden (139.730 pts) and not expected team Denmark (139.487 pts) stands provisionally third in bronze medal position. Leading Swedish rider so far is Elin Mattsson, the younger sister of Grand Prix rider Marina Mattsson. Elin and the 10-year old Swedish bred Cognac (by Roosevelt x Koncerz) rode a lovely team test with much control over each of the exercises, good uphill flying changes and a strong left extended canter. She scored 70.243% to rank sixth so far, while team Ebba Kjellberg and the 13-year old Danish bred Bogegardens Limbery (by Limbus x Castor) is now standing 8th with 69.487%. The pair was first to go in the morning at 8 AM and immediately set the bar for the rest of the group.

The second group of junior riders, 37 in total, will ride the team championship test on Thursday morning, starting at 7 AM. The team medals will be decided shortly in the afternoon.