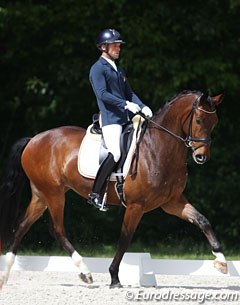 Spain announced the horses that will represent the Iberian country in Ermelo on 22 June, and told Carrascosa that his internationally achieved CDI scores on the 5-year old Forbes would not be considered for team selection. Carrascosa declined from competing in the young horse classes at the 2017 Spanish Dressage Championships in Segovia on 1 - 4 June 2017, and is now being ruled out for consideration by the RFHE.

The Dusseldorf (GER) based Carrascosa has been showing Joanne Vaughan's 6-year old Hanoverian gelding Forbes (by Fidertanz x Rohdiamant) in the international young horses classes at the CDI's in Compiegne (May) and Pompadour (July), France. He scored 83.800, 85.00, 85.400 and 84.600 points in those four classes.

Carrascosa went public on Facebook with his criticism and did a radio interview with the Spanish Rienda Suelta Radio on the selection process which he believes goes against the welfare of the horse.

"If you don´t compete at the Spanish Championships, you´re a bad boy and get punished for it," Carrascosa stated. "The selection process for the national teams in Spain should be reconsidered by the RFHE in order to ensure that Spain stays as competitive as possible at international dressage championships.  Taking a horse on a 3.500km trip just for a selection trial has nothing to do with horsemanship, nor fair sport. Even less if the selection trial at the Spanish Championships seems to be the ONLY trial that matters (of course only when the results coincide with the opinion of the RFHE)." 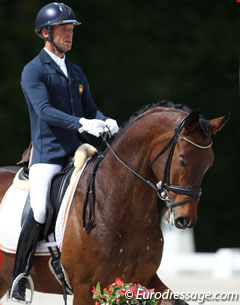 Carrascosa continued that, "All competitive countries base their selection of the national teams on results which are obtained at international shows. If selection is based on the fact that someone is following or not some funny and pointless rules...then the quality of the sport suffers from it."

Most countries in Europe hold national selection trials within their country (Holland, Germany, Denmark, Sweden, Great Britain) but will take the CDI scores of foreign based riders into consideration for team selection.