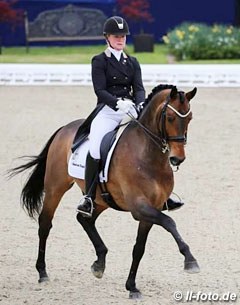 Ralph Westfhoff and Sven Rothenberger have struck another collaboration and together acquired the 7-year old Dutch warmblood gelding Foreign Affair.

Foreign Affair is by Rock Forever out of Woline (by Scandic) x Cocktail. He is bred and was owned by former Dutch team veterinarian Jan Greve.

The bright bay gelding arrived in Patrik Kittel's barn two years ago and was nicknamed Filur. Under Kittel's assistant trainer Malin Nilsson the horse won the 5- and 6-year young horse classes at the CDI Falsterbo, which annually hosts young horse classes open to combinations from Scandinavium countries. At the 2017 CDI Hagen in April the pair won the national Prix St Georges Special, which was a qualifier for the Nurnberger Burgpokal for developing PSG horses. Foreign Affair's performance and 74.976% score in Hagen drew the interest of potential buyers.

"It's a very exciting direction for the future competition career of the Nurnberg BorgPokal qualifier winner Foreign Affair," said Patrik Kittel. "Today, he joined his new family, the Rothenbergers. We had huge interest in this young, talented gelding, but it was the Rothenberger family who quickly saw the potential of Filur, and the match he would make for their family."

"Foreign Affair stands in the box directly next to Cosmo, because we thought that both Hagen winners can exchange some advice. And as both are KWPN geldings, they can certainly talk in Dutch," Rothenberger joked. "When we enter our barn  we see one great horse after another. We very much appreciate to have these opportunities."

This is the fourth horse in which German business mogul Ralph Westhoff and his partner Martha Groeninger invested for the Rothenberger kids.