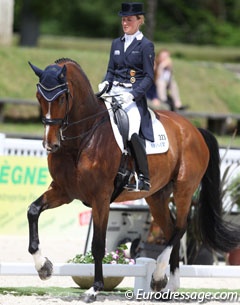 It were the new kids on the block that shone brightly in the 3* Grand Prix class that was held on the opening day of competition at the 2017 CDIO Compiegne in France on Thursday 18 May 2017. While the weather forecast was dire with heavy rainfall predicted, the gods favoured dressage and kept it dry for the entire Grand Prix.

The 3* Grand Prix was an exciting class to watch with tons of newbies on the floor. Either seasoned riders presented their rising stars, or brand new combinations made their debut. Year after year Compiegne delivers with top sport dressage.

The only German in the class,Helen Langehanenberg, bested a field of 37 riders aboard her husband Dr. David Lichtenberg's 9-year old Dutch warmblood gelding Suppenkasper (by Spielberg x Krack C x Juventus). The talented bay gelding made the transition to Grand Prix level at the beginning of 2017. He first competed in the Inter A and Inter II in Munster in January, then contested the same national classes at the 2017 CDI Dortmund at the beginning of March. Suppenkasper was entered to compete in the Louisdor Cup qualifier for Developing Grand Prix horses at the CDI Hagen in April, but he was a no-show. This fueled the already rampant rumours about a sale of the horse even more. However in Compiegne the pair still proved to be together and in a winning mood.

The tall bay gelding is a big flashy mover and showed wonderful trot and canter extensions. He has a great silhouette in passage as well as in piaffe, but lacks overall strength from behind and self carriage, which will only improve in time. In the piaffe has showed great ability to sit but gets tense and has a trembling lower lip. The second piaffe was crooked to the left.  The weight in both reins was not entirely evenly distributed with more bending to the right. The collected walk needed to be more closed, the extended was ground covering. In the one tempi changes the horse crept behind the vertical instead of changing forwards and upwards. These are all small immaturity issues which can be solved in time. 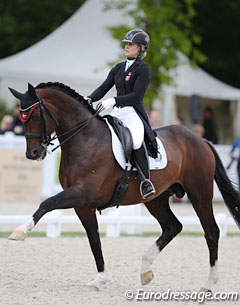 The 3* Grand Prix was judged by Du Tranoy, Gribbons, Matthiesen, Fransen-Iacobaeus and Gardner. Two of them placed Langehanenberg first, though their marks were quite in unison. Helen finished on 72.520% with a 71.000% low score and 73.400% high score.

Danish Anna Zibrandtsen made her CDI debut on the Dutch warmblood horse Arlando (by Paddox x Mytens xx) which she purchased for a hefty seven figure sum in April. The elegant and lightfooted bay stallion also danced under his new ride and the pair showed already great control. While the extended walk was still very limited and the trot extensions all flash in front but nothing behind, the overall trot work was expressive with very good piaffe-passage work. The only mistake was a counting error in the zig zag. The tempi changes were conservative and in the final piaffe at X the horse lost its clear 2-beat rhythm. The judges rewarded their ride with 71.680%. The 23-year old Zibrantsen, who has been training with Jan Brink for years and is still working with the Swede, is now getting extra coaching from Arlando's former rider Diederik van Silfhout for an optimal gelling process. 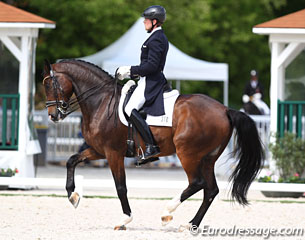 Finnish Henri Ruoste saddled his new ride Dixiland, a 10-year old Holsteiner by Dolany x Loutano owned by Jochen Arl and previously competed by Rasmus Bondergaard. Ruoste has only been riding the gifted gelding for five months, but the pair showed great potential. Dixiland has much talent for piaffe in which he really sits and can get a good rhythm going when balanced. In the trot work the horse had too much tendency to passage. The extended walk needed more overtrack and the collected walk got lateral, but the extended canter was beautifully uphill and the one tempi changes were dead straight. The pirouette right was very nice. Overall the horse's nose needed to be out a bit more.

Shelly Francis and Pat Stempel's 14-year old Oldenburg gelding Doktor (by Diamond Hit x Renoir) were the most seasoned competitors in the group and made their mileage count. The bay gelding showed controlled trot extensions, but lacked some push and power from behind in the passage. The rider's hands were wobbling unsteadily above the withers, which did not benefit the horse's regularity in the execution of the movements. The zig zag was well ridden, the pirouette left was the better one of the two and in the final piaffe at x the horse had a good rhythm going. 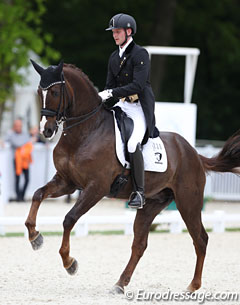 After selling his 2016 Olympic ride Arlando to Anna Zibrandtsen, Diederik van Silfhout has to build on new horses for his future at top level. With the 13-year old Westfalian gelding Four Seasons (by Furst Piccolo x Mon Amour) he has found a new challenge. The horse produced very impressive trot extensions with much freedom in the shoulder. The passage was very rhythmical but in the piaffe, the horse does not properly take the weight on the hindquarters and brakes with the front legs in the movement. Van Silfhout, however, showed his skill by keeping the rhythm going smoothly despite the far-from-textbook execution of the movement. The horse's tongue was retracted throughout the test. The extended canter was beautifully uphill, as well as the one tempi changes which could gain more ground cover.

Patrik Kittel also brought along his new star, the 9-year old Swiss warmblood Well Done de la Roche CMF (by Furstentraum x Walt Disney) which he took over from Marc Boblet two years ago. The very feminine looking mare, owned by Swiss ladies trio Françoise Trembley, Brigitte Bigar and Muriel Perret, has amazing potential but was quite tense in the Compiegne arena. It appeared as if her entire top line was under current and there was little relaxation nor swing in the back. This resulted in, for instance, a non-execution of the trot extensions (zero overtrack). The passage was so lightfooted and expressive, the piaffe showed major airtime and lift but it was all too insecure and tense at the moment. Also in the two tempi changes the mare swung heavily to the right with the hindquarters. The quality and potential are certainly there, now the rider has to go in search of relaxation and natural swing. They scored 69.660% for sixth place. 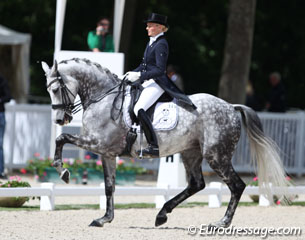 The 3* Grand Prix class was finger licking good, with so many talented horses, or beautiful rides. Definitely a horse to watch for the future is Anna Blomgren's Danish warmblood Torveslettens Quattro (by Quaterback x Carano). Rarely does one see a prettier horse than this gorgeous, dapple grey. The horse has a piaffe and passage that reminisces of Blue Hors Matine: so much power, so much suspension, so much expression. Phenomenal ! The passage was too stagnant though and had to cover more ground (as well as have the horse more up in the bridle).. As much as the piaffe and passage were incredible highlights, as deep were the low points, unfortunately. The horse has a hard time gaining overtrack in the extended walk and the tempi changes are very much up, but unbelievably unbalanced with both the hind and forequarters almost zig-zagging in the diagonal. Let's see how this pair develops. Blomgren showed a gorgeous seat and this is simply a wonderful combination to keep an eye on.

Australian Olympian Mary Hanna also debuted her new Grand Prix ride, the 10-year old Dutch warmblood mare Calanta (by Johnson x Goodtimes). Hanna bought the bright bay in 2015 and made her first big outing in Compiegne. The wonderful mare has a great silhouette in passage but throughout the test the horse was a bit too much hand-held. In passage the mare needed to move more forwards and cover more ground. The trot half passes are very expressive. Calanta has all what it takes but needs to mature more. 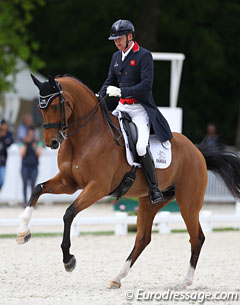 Gareth Hughes made his come back on what was his 2016 Olympic hopeful, the 11-year old Dutch warmblood mare Briolinca (by Trento B x Royal Dance). The mare injured herself at the 2016 CDIO Rotterdam and the Games were over an out. Hughes and Briolinca impressed in Compiegne with a top piaffe and passage. The bright bay mare has much power and rhythm, even though the piaffe moved a bit too much forward. The contact with the bridle was light and steady. The single tempi changes were uphill but several mistakes in the two tempi changes pushed the score down though.

Eurodressage's Astrid Appels is on the scene taking photos. If you are interested in digital files or prints for personal use, social media, contact us.