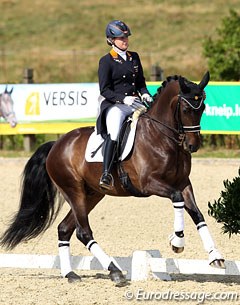 Baldacci is an 11-year old Dutch warmblood gelding bred by Leunis van Lieren of Stable Hexagon in Schore, The Netherlands. He is by Havidoff out of Ruby's Tasja (by Rubiquil x Doruto).

Under Jeanine Nieuwenhuis, the dark bay gelding began his international sport career at a very early age, competing at CDI Junior Riders level as a 6-year old. The pair represented The Netherlands at the 2012 and 2013 European Junior Riders Championships and at the 2014 and 2015 European Young Riders Championships. They won three times team silver and once team gold.

At national level Nieuwenhuis and Baldacci became 2013 Dutch Junior Riders Champion and won silver at the 2014 Dutch Young Riders Championships. Their last international together was almost two years ago at the 2015 European YR Championships in Vidauban, where they finished 6th in the Kur to Music Finals.

In the autumn on 2015 Nieuwenhuis left Stable Hexagon to work for Tim Coomans and Thamar Zweistra took over the reins. She brought Baldacci to national Grand Prix level. At the start of 2017 the pair scored 68.45% in the Grand Prix at the 2017 CDN Liempde.

Trained by Albrecht Heidemann, Camille Carier Bergeron has been competing the 12-year old Westfalian gelding Expression (by Siberian Express x Florestan) at international Young Riders level on the 2017 CDI Wellington show circuit. With Baldacci she will have a second iron in the fire.

"We are thrilled with this new addition to our family. Our main priority now is getting to know him and for Camille to learn how to do well on him," said Camille's father Gilles Bergeron. "We may at first use Baldacci as Camille’s Young Rider back-up horse."