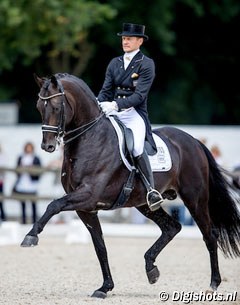 Former World Champion Edward Gal has made his Grand Prix debut aboard his new, rising star Zonik at the national show in Kootwijk, The Netherlands, on Saturday 29 April 2017.

Gal and the 9-year old Danish warmblood stallion Zonik (by Zack x Romanov x Don Schufro) started in Kootwijk as a late entry and scored 76.05% in Kootwijk. Eleven riders were originally entered to ride the Grand Prix there and the class was judged by J. Gerritsen and P Wolters-van den Berg.

"I'm actually very happy (with the test) and of course we have to gain experience to connect all the movements together," Gal told Horses.nl. "Zonik can do all the movements well and at home everything works. But at shows you can gauge where you are at. It needs some time to develop more strength and make it all smoother."

Zonik is owned by Gaston Glock, who acquired the stallion in the winter of 2012-2013. Hans Peter Minderhoud competed him at the 2013 World Young Horse Championships and in 2015 Edward Gal made his international show debut on the black at small tour level.

Gal's Grand Prix debut with Zonik came right on time as the Dutch dressage A-team has seriously been weakened with the retirement of Parzival and the sale of Olympic team horse Arlando. Furthermore, team rider Hans Peter Minderhoud had to withdraw from the 2017 World Cup Finals because his horse Flirt got injured. Minderhoud's team ride Johnson has not been out in a half a year. He did his last show in October 2016 at the CDI-W Lyon. Nevertheless, more Dutch combinations are knocking at the door for this year's team selection.