2017 Van Olst Stallion Show: Breeding is a Collaboration between Stallion Owner and Breeder 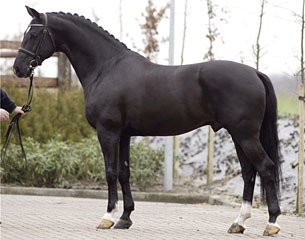 On Sunday 16 April 2017 Gert-Jan and Anne van Olst will open their stable to the public for their annual stallion show. The barn opens at 13h00 and the show with the presentation of the young and older stallions will begin at 15h00. Don't miss this wonderful breeders' event.

"Breeding you do together. For the breeder, as well as the stallion owner the foal is progress and only the best is good enough," said Gert-Jan van Olst. "This is our starting point for introduction our stallions at the 2017 Stallion Show on 16 April 2017."

The 2016 breeding year was a great one for Van Olst. Their preferent foundation stallion Negro (by Ferro) has been proclaimed KWPN Stallion of the Year and was honoured at the 2017 KWPN Stallion Licensing in 's Hertogenbosch with a special ceremony. Negro's most famous son Valegro became the double Olympic Champion, reclaimed gold at the 2016 Olympic Games in Rio.

Van Olst's 6-year old stallion Glamoudale (by Lord Leatherdale x Negro) was the most used breeding stallion by KWPN breeders in 2015, with no less than 243 foals registered with the KWPN in 2016. 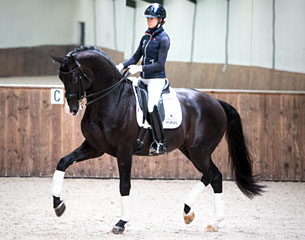 Everdale was the 2012 KWPN Stallion Performance tst winner and 2013 Pavo Cup champion. He has made his show debut at Prix St Georges level. In 2016 all three of the colts presented at the licensing (from his first crop of foals) were accepted. His son Inclusive became the 2016 KWPN Stallion Performance Test winner, but also Inverness and Inspire prove to be extraordinarily talented. Excellent was also licensed with the NRPS society.

The KWPN Keur stallion and Olympic Grand Prix dressage horse Painted Black (by Gribaldi x Ferro) has joined the Van Olst stallion roster for 2017. Van Olst considers itself very fortunate that the black stallion joins the stallion collection. Painted Black has an unprecedented number of children competing in national sport. With his superb index of 169 (90% reliability), he takes a very respectable 3rd place in the KWPN index and belongs to the small group of 'top stallions’.

Breeders can see the Van Olst stallion collection live on 16 April 2017 and make their decision for the 2017 breeding season!