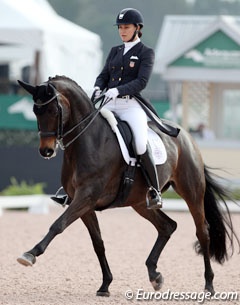 American FEI dressage horses Horizon and Don Principe have both tested positive to the FEI banned substance Ractopamine at the 2017 CDI 3* in Wellington held on 8 - 12 February 2017. Both the riders and horses have been suspended.

The cases involve the use of Banned Substances under the FEI’s Equine Anti-Doping and Controlled Medication Regulations (EADCMRs). Ractopamine, also known as PayLean, is a beta agonist which has recently been shown to improve growth performance.

At this 2017 CDI Wellington Adrienne Lyle competed Betsy Juliano's Oldenburg mare Horizon (by Hotline x Don Schufro)  in the international small tour classes. The combination finished third in the Prix St Georges (70.482%) and won the Intermediaire I (by 73.553%) and Inter I kur to music (75.325%). 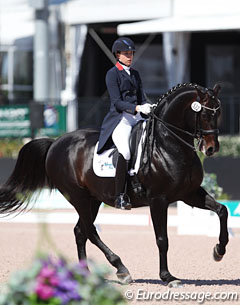 At the same CDI Wellington, Kaitlin Blythe's 18-year old Hanoverian stallion Don Principe (by Donnerhall x Prince Thatch xx), owned by Maryanna Haymon, competed in the Under 25 division. They were third in the Intermediaire II (68.202%), fourth in the Short Grand Prix (64.814%) and third in the Kur to Music (68.925%). At the vet check for that show Don Principe already had to be reinspected but was then passed by the FEI vet