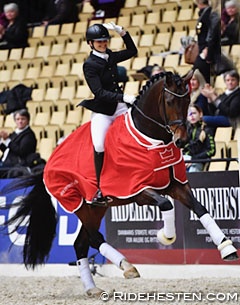 The five years are ridden in two rounds to determine the final cut which is test ridden by a guest judge rider in a third round. The guest judge rider this year was German Dorothee Schneider, who had travelled to Herning to present Sezuan in the stallion show and compete Sammy Davis Jr in the CDI Grand Prix.

This year is was Betina Jaeger aboard Zancor (by Zack x Solos Landwind) who reigned supreme. The dark is oned by Andreas Helgstrand in partnership with Nobel Food Holding.

With 884 points Zancor became the high scorer in the Championship. He received 8.5 for rideabiity and 9 for potential. Schneider praised Zancor for his excellent canter and softness in the bridle; but she liked to have had him sharper on the aids, but said it could be because he was felt tired.

Atterupgaards Botticelli (by Benetton Dream x Caprimond) became the runner-up with 881 points. He was the high scorer for the points that Schneider awarded him. The horse got 9 for rideability and 9.5 for potential from the German Olympian.

Laerke Stensvang (by Zack x Don Schufro) finished in third place with 878 points. bred by Lene Schmidt Fraehr and owned by horse dealer Klaus Munkedahl, the black Laerke was presented in the first two rounds by Sanne Henningsen. Schneider gave the horse a 9 for rideability and potential.