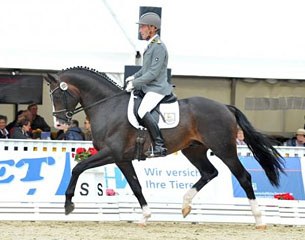 The Hanoverian licensed stallions Libertad and Emilio Sanchez became the recipients of the 2017 Weltmeyer Prize, which was handed by the Hanoverian society at the stallion show of privately owned Hanoverian sires.

The Welmeyer Prize is given annually to Hanoverian licensed stallions, which passed their performance tests last year with the best results of their age-groups. For 2017 two dressage bred stallions became the recipient of the Weltmeyer prize.

With top scores for his temperament and rideability, Libertad (by Londontime x San Remo) completed his 50-day-test at Schlieckau. The black, whom owner Ingo Pape discovered at the stallion licensing auction in Verden, lead his age-group with a final score of 9.03. Libertad is bred by Mona Diekmeier.

Emilio Sanchez (by Estobar NRW x Don Crusador) is bred by Hinrich Engelke and owned by the Celle state stud. He had passed his 50-day-test with emphasis on dressage at Neustadt/Dosse with a final score of 8.58. The bay descends from the dam line of World Cup winner Walk on Top.