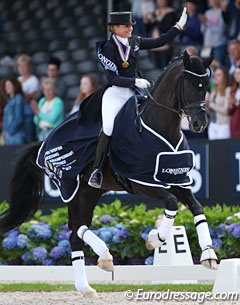 Schneider will be the test rider of the finals for the 2017 Danish Warmblood Young Horse Championship for 5-year olds held annually in Herning.

She will also be presenting the triple World Young Horse Champion Sezuan (by Zack x Don Schufro) in the gala evening.

For the past two years in 2015 and 2016 Charlotte Dujardin served as test rider, but the combination of Sezuan's presentation and featuring Schneider as Olympic team gold medalist worked well for 2017. Other guest judges were Hasse Hoffmann, Rune Willum, Jan Brink, Kyra Kyrklund and others.