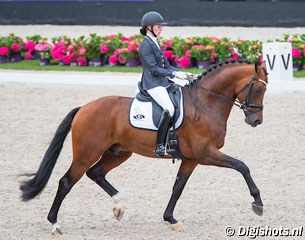 Bred and owned by Peter van de Sande from Liempde, The Netherlands, Guardian S is by Bodyguard out of Amadin S (by Trento B x Juventus x Michelangelo)

The 5-year old bay was licensed in 2014 and finished second in the KWPN Stallion Performance Test with 84.5 points.

Under Kim Koolen he competed in the 2015-2°16 KWPN Stallion Competition and the pair was in the running for Dutch team selection for the 2016 World Young Horse Championships but did not make the final cut for Ermelo. Kirsten Brouwer then took over the ride.

Despite the sale of the popular breeding stallion, Brouwer will continue to ride and compete Guardian S at the moment and show him on this winter's KWPN Stallion Competition circuit.

"His gaits and character are very good so that we have much confidence in his possibilities for the big work in the future," Janssen told Dutch equestrian magazine De Paardenkrant.

Van Grunsven last competed internationally in dressage four years ago at the 2012 Olympics in London.