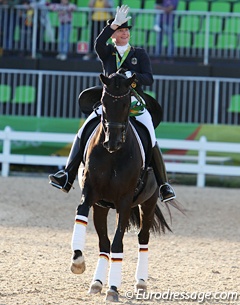 Dressage at the 2016 Olympic Games in Rio de Janeiro, Brazil, comes to a conclusion on Monday 15 August with the indivdual finals contested in the Grand Prix Kur to Music. Here are the official starting times (Rio time) of the freestyle finals. American Steffen Peters is first to go and German Isabell Werth drew the most favourable position as last rider to go.

The individual medals are decided by one class, per IOC regulations. This was also the case in 2012 but before that the results of all three rounds were totalled to determine an overall winner, who was not only best in the technical tests (Grand Prix and Special) but also in the Kur. Now the form of the day is decisive for individual glory.

Here are the Rio starting times for the Grand Prix kur: