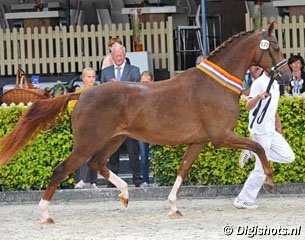 Iveniz Texel was named the 2016 KWPN Mare Champion at the 2016 KWPN Horse Days held in Ermelo, The Netherlands, on Saturday 13 August 2016.

The 13 most impressive 3-year old mares that qualified for the 2016 Dutch warmblood mare championships were invited to the championships ring to compete for the title.

The judges' and audience’s favourite was the attractive star and prok mare Iveniz Texel. This bay beauty is by Negro out of preferent mare Veniz  (by Krack C). She is bred by Wim van der Linde from Texel, The Netherland and owned by RS2 Dressage Center De Horst BV in Groesbeek, The Netherlands.

“What a fantastic mover, a true champion,” praised Marian Dorresteijn who served as chair of the judges' panel.

The top two mares of the Friesland regional mare championship placed second and third. Star mare Ivita (by Apache out elite mare Wavita, by Sir Sinclair) was named reserve champion. Ivita is bred by Henstra and Henstra from Drogeham.

The third placed mare was elite mare I’Actrice VDL (by Don Tango B out of L’Actrice, by Lorentin I). She is owned and bred by VDL Stud. The latter did a great IBOP-test with a score of 84.5 points under American Jackie Ahl-Eckhaus from San Luis Obispo, CA.