All Five Russian Equestrian Athletes Cleared to Compete at Rio 2016 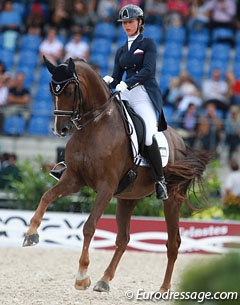 The FEI has today received confirmation from the IOC that all five Russian equestrian athletes have been cleared to compete at the Olympic Games in Rio. The news comes following a detailed submission by the FEI, including confirmation that all five had no previous anti-doping rule violations.

The five Russian equestrian athletes that are now cleared to compete in Rio are:

Following a meeting on 24 July 2016, the IOC Executive Board (EB) declared that Russian athletes would only be accepted as eligible for the Rio 2016 Games if they met a set of stringent criteria, including individual analysis of each athlete’s individual anti-doping record. The IOC EB also ruled that any Russian athlete that had ever been sanctioned for doping, even if they had served the sanction, would not be eligible to compete in Rio.

FEI President Ingmar De Vos welcomed today’s news. “This has been a very difficult time for our Russian athletes, who all have clean anti-doping records under both human and equine testing regimes, so we are very happy to have confirmation today from the IOC that all five are now declared eligible to compete.

“Our sport is not implicated in the McLaren Report, we also have confirmation from the IOC that there have been no equestrian positives in the re-testing of athletes from Beijing 2008 and London 2012, and WADA has no cases against Russian athletes in equestrian sport, but obviously we still had to go through the process as outlined by the IOC Executive Board last month.

“All five riders have been tested and we did individual analysis of their anti-doping history, which we submitted to the IOC. That documentation has undergone a detailed assessment by the CAS expert and the full process has now been signed off by the Review Panel set up by the IOC specifically to deal with the issue of Russian athlete eligibility.

“The good news has come just in time as the Eventing starts tomorrow morning with the first horse inspection at 8.30!”