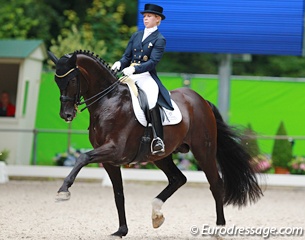 The Swedish Equestrian federation and chef d'equipe Bo Jena have announced the team that will represent Sweden at the 2016 Olympic Games in Rio de Janeiro, which take place o,n 9 - 15 August 2016.

After a final test of a potential team at the CDIO Rotterdam and rising combinations knocking at the door via the 4* tour in Rotterdam, Jena was able to make his final pick.

Bo Jena, in consultation with team trainer Kyra Kyrklund, have picked two experienced riders and two new comers on the team: the 29-year old Juliette Ramel and the 33-year old Therese Nilshagen have never represented Sweden in a senior team at a major intercontinental championship.

"These two riders have gone from strength to strength during the year and Kyra Kyrklund and I have followed them and watched them develop more and more," said Bo Jena about the two Swedish Olympic debutants. "It's fun to be able to present two new riders to the Olympics starting line."

The team reserve has not yet been announced but more team candidates are competing at the CDI Falsterbo next week, which will turn into a ride-off for the team reserve spot. The strongest contenders are Emilie Nyrerod (Miata), Rose Mathisen (Zuidenwind) and Mads Hendeliowitz (Jimmie Choo).