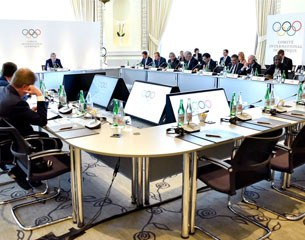 This includes a zero-tolerance policy with regard to doping, which was re-confirmed by all participants. For this purpose, an annual amount of an estimated half a billion USD is spent, and approximately 300,000 doping tests are carried out every year.

The worldwide fight against doping is the responsibility of the World Anti-Doping Agency (WADA), founded on the initiative of the IOC in 1999. Governments of the world and the Olympic Movement are sharing the engagement in and funding of WADA equally.

The sports organisations, in each individual case, based on the reasons for non-compliance, have to decide on the consequences of such declaration. With regard to participation in the Olympic Games, it is up to the IFs only to decide on the technical eligibility of athletes, in particular in relation to doping issues. Only NOCs can enter athletes to the Olympic Games, selecting from the IF pool of eligible athletes.

To provide a level playing field for all clean athletes at the Olympic Games Rio 2016, the IOC has already put special measures in place. These were strongly supported by all stakeholders during today’s Olympic Summit:

To strengthen these measures to ensure a level playing field for all athletes participating in the Olympic Games Rio 2016, the IOC has convened this Olympic Summit. The Olympic Summit discussed questions which affect the eligibility of athletes, in particular with regard to the balance between collective responsibility and individual justice. In this context, neither the IOC, nor the IFs, nor the NOCs have full discretionary power. This principle was applied by the Court of Arbitration for Sport (CAS) when it declared a rule of the IOC, which would have kept doped athletes away from the next edition of the Olympic Games (Osaka Rule) null and void.

As a result, the Olympic Summit unanimously agreed on the following actions:

The Olympic Summit appreciates the full support of the Association of the Summer Olympic International Federations (ASOIF) for these principles, which allow the IFs to anticipate potential further developments in the fight against doping. The Olympic Summit also appreciates the support of WADA for these principles and its readiness to cooperate closely with ASOIF to ensure their implementation. The Olympic Summit welcomes and supports the firm commitment of the IOC to protect the clean athletes, to fight against doping with zero tolerance and together with all its stakeholders to ensure a level playing field for all clean athletes at the Olympic Games Rio 2016.