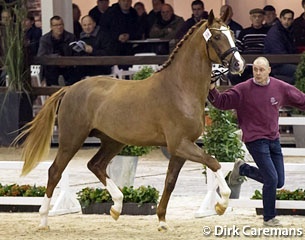 Three stallions were invited into the premium ring to compete for the champion's title. Naxcel V (by Balou de Rouet x Landetto) was proclaimed champion. He is bred by Leo Vermeiren and owned by Gert Vermeiren and Gerfried Puck.