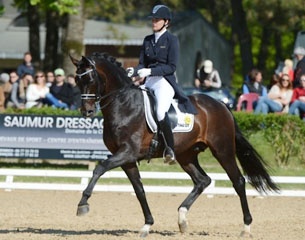 Soliman was the champion of the 2007 Hanoverian Stallion Licensing. French Xavier Marie acquired the stallion at the auction following the stallion licensing for 700,000 euro.  The stallion went on to win the 30-day Stallion Performance Testing with 9.38 for conformation, 8.88 for trot, 9.06 for canter, 8.13 for walk, 9.63 for rideability and 7.13 for jumping.

In 2011 Soliman qualified for the Bundeschampionate under Christian Flamm and finished third in the first round and ninth in the Finals. Under French Jessica Michel he was trained and competed up to Prix St Georges level. The pair competed at two CDI's in 2013: Vierzon and Saumur

Xavier Marie has decided to sell off his entire dressage stock at Haras de Hus in Petit-Mars, France, except for his number one dressage stallion Don Juan de Hus.

"(Alexandre) proposed me to send (Soliman) to him, something I've never done before. Less than two months after the horse's arrival there he offered to buy the horse," Jessica Michel explained.