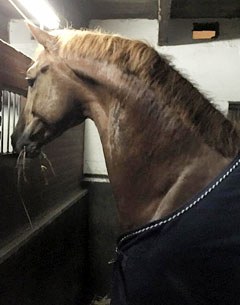 Although Van der Meer has a barn full and is currently campaigning Grand Prix horse Zippo and small tour horses Coco Chanel (by Sandreo) and Chagall (by Jazz), the professional rider secured his string of horses with new youngstock.

Ice is a 2013 born chestnut colt by Negro out of Orlandaise (by Indoctro x Wisconsin). He is bred by Ron Schonewille, who sold the horse to Patrick.

"Patrick already had his eyes on Ice. He's tall, standing 1.75 m now, and has an amazing appearance," Schonewille told Dutch equestrian magazine De Hoefslag. "I first wanted to present him at the stallion licensing, to see how it went. While I was preparing for the licensing those six months he was a joy to work with. He's intelligent and loves to work for you. Ice was not selected because he's sickle hocked. I could live with that. It's not a disadvantage for a sport horse. Ice was gelded and Patrick has picked him up straight away."