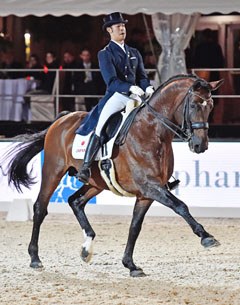 There was joy and heartache in equal measure at the special Olympic qualifier staged in Gestut Peterhof in Perl, Germany on Friday 11 September 2015, where Japan pipped South Africa by the narrowest of margins for a coveted team slot at the Rio 2016 Olympic Games. In a competition that swung in favour of both sides at various stages, it seemed the result could go either way. But in the end Team Japan came out on top by just 0.06 percentage points to clinch it.

There was some compensation for the disappointed South Africans when Tanya Seymour, who produced a lovely test to finish fourth in the competition with Ramoneur, earned her country one of the two individual qualifying spots on offer, the other going to Korea when Dongseon Kim finished eighth with Bukowski.

A total of 34 athletes from 17 nations lined out in the 2* Grand Prix competition staged within the framework of the CDI4* Dressage Gala at the charming German venue, and 21 were chasing the Olympic qualifying slots. There were only two countries in contention for the single team berth - Japan and South Africa - while competitors from Indonesia, Iran, Kazakhstan, Korea, Morocco, Palestine, Philippines, Singapore and Chinese Taipei also battled it out for the individual qualifying places. This special qualification event was open to competitors from FEI Olympic Groups F and G and to the FEI Olympic Group C countries Kazakhstan, Kyrgystan, Turkmenistan and Uzbekistan.

Kazuki Sado got the Japanese effort off to a good start when posting 65.180 with the 11-year-old gelding Ziroco, and when Akane Kuroki scored 66.280 with Don Luka and Shingo Hayashi earned 65.640 with Ramses der II they already had the edge.

The South Africans however were chasing them hard, a big score of 68.880 from Tanya Seymour and Ramoneur seriously boosting her side’s chances when added to Denise Hallion’s 63.220 with Wervelwind, and Katherine Berning’s 63.180 with Brisbane. With three riders gone for each team, the leaderboard showed Japan out in front on a total of 197.1 but the South Africans were less than two points adrift on 195.82.

There was huge pressure on the last competitor from each side, and a great 68.420 from the final South African partnership of Nicole Smith and her 17-year-old mare, Victoria, really put it up to Japanese anchorman Masanao Takahashi.

The 33-year-old has only been partnering the experienced Fabriano for a few months now, the 16-year-old stallion previously competing at two European Championships, the London 2012 Olympic Games and the 2014 World Equestrian Games  in Normandy, France with Austria’s Renate Voglsang on board. Takahashi, who was a team bronze medallist at the Asian Games in Doha, Qatar in 2006, produced progressively good results with the horse at Wiesbaden, Capelin and Verden this summer however, and yesterday their 68.600 was good enough to fill sixth place in the competition and to swing the pendulum of good fortune in his country’s direction by the tiniest of margins. Japanese Chef d’Equipe, Shinichi Terui, said afterwards, “I was surprised today but very happy we are going to Rio! The South Africans were very strong, and their last rider was particularly good, so in the end I think we are lucky!” However he commended his team for their great result. “All four riders did a very good job today. They were under a lot of pressure, and I’m really happy with how they coped with that” he pointed out.

South African Chef d’Equipe, Jenny Neill, said, “it was so tight with the marks, but I’m very pleased with our performance, our team has come so far and I am excited by how well they did today and very happy that we have qualified one individual for Rio. Hopefully we might also get another individual qualified as well. But while I’m very excited I’m also very disappointed - in the end however, it is what it is!” she added.

She said she wasn’t surprised that Tanya Seymour had produced such a strong result to finish fourth in the class that was, predictably, dominated by German riders - Uta Graf taking top spot with Lawrence followed by Stella Roth in second with Rubin Action while Hendrik Lochthowe finished third with Maggie’s US Latin.

“Tanya can do a 69 or 70 (percent score) and Nicole (Smith) also. Our riders are all based across Europe but Tanya was born in South Africa, then her parents moved to Australia before coming to Germany. She and the other riders all come back frequently to South Africa to support our sport with clinics and training” she explained. And in true sporting fashion, Jenny Neill concluded “we wish the Japanese all the best, they have lovely horses and good riders”.

2 nations were represented by teams : Japan and South Africa.

21 competitors from 11 nations competed for the Olympic qualifying spots.

2 individual qualifying spots were earned for their country’s by South Africa’s Tanya Seymour who finished fourth with Ramoneur and Korea’s Dongseon Kim who finished eighth with Bukowski.