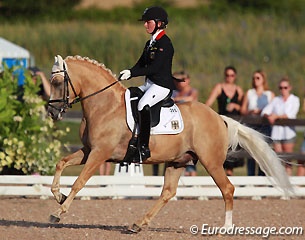 The action continued at the 2015 European Pony Championships in Malmo, Sweden, on Friday 7 August 2015 with the first group of riders contesting the individual test for a first set of individual medals to be earned. German Nadine Krause and her 9-year old palomino stallion Cyrill (by Champion de Luxe) have taken a provisional lead with a 76.732% score.

The European Pony Championships are jam-packed as one main competition arena needs to host dressage, show jumping and eventing dressage  after each other. The first group of riders for the dressage individual test were scheduled to compete on Friday afternoon at 15h45, but the other disciplines built up such a delay in the schedule that the first rider went into the ring at 16h30. A big rain shower hit the show grounds at the beginning of the class, but after twenty minutes the sun cleared the sky and magical golden sunlight hit the arena for the rest of the afternoon.

German Nadine Krause and Cyrill produced a very focused test with good forward energy in the trot work. The pony was smooth on the bent lines and the trot extensions had much shoulder freedom. Krause put in some clever riding, lowering the temp in the shoulder in left so the pony remained cadenced and ground covering. The collected walk before the walk pirouette was lateral though. In the extended walk Cyrill has two hooves overtrack but does not really swing over the back. Also in the canter on the serpentine the pony could have shown more suppleness in his strides but overall the canter movements were well ridden. The pony lost some ground cover in the voltes on the centerline though. The final transition from canter to trot was mediocre as the pony dropped into walk for a fraction of a second. 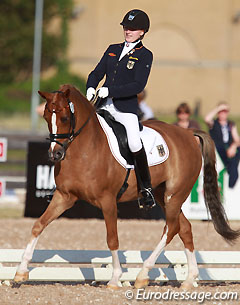 German Lana Raumanns landed a provisional second place on her Dutch bred Den Ostriks Dailan. The narrow chestnut pony is not so flashy in trot but has an outstanding ground quality in canter. The shoulder in left lacked suppleness, but overall Raumanns had a much better contact with the bridle today as the pony did not tilt so much as in the team test. The extended walk was active and ground covering. The pony could have picked his legs up more in the rein back. In the counter canter, the pony maintains a very good balance and the extended canter right was a highlight. The rhythm could have been a bit purer in the final extended trot on the centerline. The pair scored 73.659%. 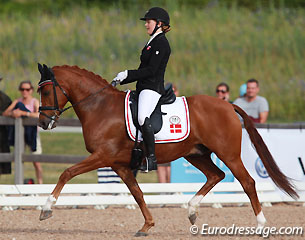 Danish Karoline Rohmann and her 9-year old Adriano B showed improvement in the individual test with more forward trot extensions, but the rider started the trot tour a bit too hurried though. The extended walk was exceptional. The pony lost a bit of his balance on the canter serpentine, and then a big mistake happened in the simple change at X where the pony picked up the wrong lead and then struck off in a cross canter. This hiccup meddled with Rohmann's focus who went off course at the end of the test. She rode the final canter extension to F instead of P and heard the bell ring for that error. Her score ended on 72.341% but there was certainly more in store. 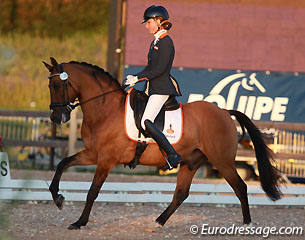 Dutch Daphne van Peperstraten and Don Camillo du Bois landed a fourth provisional place. The pony showed improved regularlity in his trot work compared to the team test, but the half pass right was on the forehand and in the shoulder in left the pony could have been clearer in his 2-beat rhythm. The extended trots were ridden quite conservatively but were correct. The pony showed no extended walk! He could barely produce one hoof overtrack and did not stretch over the back. Van Peperstraten rode very concentrated canter work with the serpentine as strong point. All simple changes had a very short walk with the pony tight in the back. The canter extensions were nice though. The pony was not entirely through in the bridle and regularly opened the mouth. They scored 71.585%. 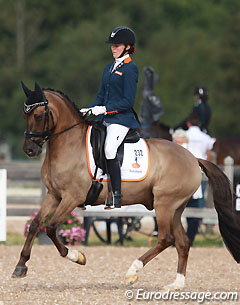 Dutch Eveline Bos and the German bred Valentino landed fifth place. The pony halted wide in front and narrow behind. He was a bit cheeky with his mini spook in the left volte but Bos rode nice trot lengthenings and had a good flow in the traversal movements. The extended walk had two hooves overstep but the nose could have been more out. There was a small hesitation in the simple change at X but overall the canter work was well ridden. Valentino's noseband appeared quite tight preventing the pony from properly chewing the bit and truly accepting the contact. They scored 71.244%.

The second group of riders will contest the individual test on Saturday morning 8 August 2015.

Eurodressage's Astrid Appels was on the scene and took photos of all dressage riders . If you are interested in ordering prints, collages, photo albums or digital images, send us an email with your name at info@eurodressage.com