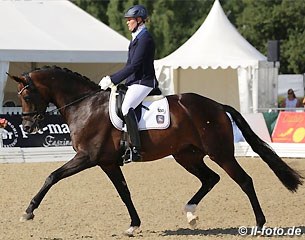 Florina, Lucky Strike and Rockman are the names of the three horses that qualified for the Final of the 2015 World  Championships for Young Dressage Horses in Verden on Friday 7 August 2015 via the 5-year old consolation finals. These two Hanoverians and one Westfalian will complement the field of competitors of 15 horses at the WC-Final in Verden on Saturday.

Claudia Rüscher, who has an extensive amount of experience in the training of young dressage horses, piloted the Hanoverian mare Florina (by Fürst Romancier x Donnerhall), bred and owned by Walter Droege, to the victory in the consolation final. The mare scored a fantastic  9.06 for first place. 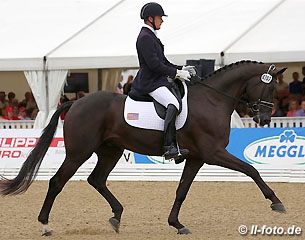 Third horse of the Small Final is Rockman. The Westfalian is a son by Rock Forever x Show Star and is bred by Herbert Laumann. He was presented in Verden by Stefanie Wolf for the owners’ alliance Johann Hinnemann and Next Generation Dressage.

The Final of five-year-old dressage horses will start at 3.00 pm on Saturday in the WC-Arena in Verden.