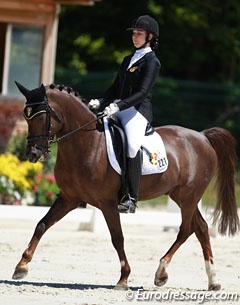 The Belgian equestrian federation has followed the recommendation of chef d'equipe Laurence van Doorslaer and announced the team that will represent Belgium at the 2015 European Pony Championships in Malmo, Sweden on 5 - 9 August 2015.

The teams for any European Championships needs to have the approval of the Belgian dressage committee and the following pony riders were selected on the team.

The 2015 European Pony Championships begin with the horse inspection on 4 August.

The pony team reserve is Yana Rynders on Enzo Leco