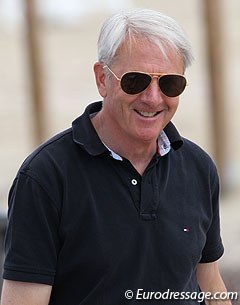 In an interview with the French equestrian magazine Cavadeos, Schramm explained that Boblet's horse Noble Dream is "an excellent mare, but we think that at this moment she is not reliable enough."

Marc Boblet has been competing the Dallara family's Noble Dream, a 13-year old Oldenburg mare by Caprimond x Donnerhall, since 2012. They were members of the French team at the 2013 European Championships and 2014 World Equestrian Games. In 2015, however, the mare's performance level began to go up and down, according to Boblet caused by health issues due to inflamed ovaries. 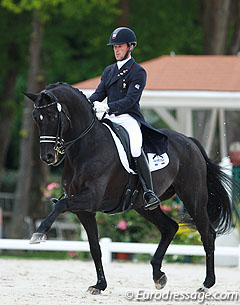 The piaffe is Noble Dream's "bete noir" movement and the mare regularly rears or leaps out of the exercise. Boblet took the horse for a three day training session to Patrik Kittel's in Germany before heading to the 2015 French Championships in Vierzon last weekend, where they won bronze.

Bemelmans underlined that it was a difficult decision to assemble the team considering Boblet's status as number one Grand Prix rider in France and with his experience as a team member.

"Tebar has been very good this season, Serre is always a reliable high scorer. Henry has proven he can score over 70% and Volla has been getting better each show. His horse has developed so well and in Vierzon the mare was superb, everybody said wow," Bemelmans explained.

The coach added that he and the French selectors clearly decided for reliability as well as giving young, proven talent a chance. 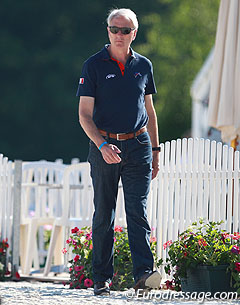 "We knew we took a great risk by selecting this team, but we need to have the courage to support young riders with young horses. This is a big stimulus for dressage in France. It shows that we give up-and-coming and not-so-famous riders a chance. These guys have been working very hard all year long, practising, trying their hearts out and they showed team spirit. They want to achieve it this year, the next year and the next. They are team players and not just riding for themselves. This is also a good decision for Marc. He will now get the time to stabilize his mare and her performances."

Jan Bemelmans was the team trainer for Spain for 16 years before he took up to job for France. He knows the cracking of the whip.

"I remember in 2000 with the selection for Sydney I left out Ignacio Rambla, Spain's number one. They were so mad at me for that. But other riders were given a chance to shine and in the end it turned out to be a great decision. I will not let myself be put under pressure. If I would cave in to pressure from established, famous riders the function of team trainer would be superfluous," Bemelmans stated. "I can make mistakes too, but I am 100% sure that this selection was done right. I did it with my head and not with my heart."