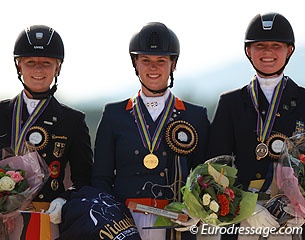 The heat wave was taking its toll on Saturday afternoon when towards the end of the class one rider after the other seeking special medial attention for a quick cool down with ice packs in their neck and buckets of ice water to put their feet in. The judging also left little surprizes as the ranking from the team championships seemed to serve as a template for the individual.  The panel for the individual test consisted of Andrew  Gardner, Maja Stukelj, Raphaël Saleh, Juan Carlos Campos, and Marietta Sanders-van Gansewinkel. 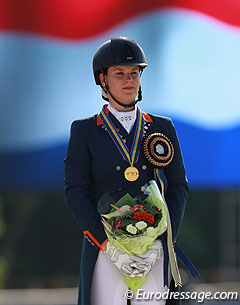 Riding with her shoulder taped after dislocating it the day before due to having hypermobile joints, Dana van Lierop proved to be very resilient in all conditions and set down a very convincing test despite several minor blemishes. Her mare Equestricons Walkure (by Romanov x Donnerschwee) was very convincing on straight lines: she showed light footed, expresssive extended trots, nice uphill extended canter and straight tempi changes. On the bent lines, though, she lost rhythm and collapsed in the hip, especially in the voltes and shoulders-in, but the judges did not reflect that in their score as the horse's silhouette remains expressive. The first halt was wide behind, the halt for rein back not square, and the end halt crooked. In one trot extension there was a clear loss of rhythm. The extended walk was lovely, the collected walk well ridden.  The canter work was very solid with good half pirouettes, a very impressive extended canter but a flying change too early on the marker. The judges scored the ride a winning 77.447%w ith a high score of 79.342% from the Dutch judge and a low score of 73.553% from the Slovenian judge.

"I never expected to get this far, I never expected gold. She always tried her best and is always focused," Van Lierop commented after the prize giving ceremony. Dana explained that Walkure looked so fresh despite the heat because, "we really had a great cool down system going. We rinse off the horse every 15 minutes without scraping it off so she could feel cool as long as possible while the water dried up." 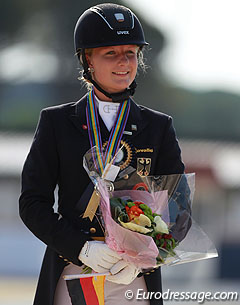 German Bianca Nowag and Reiner Bockholt's 11-year old Westfalian mare Fair Play RB (by Fidermark x Brentano II) were very accurate and solid in the individual test. In trot the liver chestnut mare moved with good ground cover and had nice suspension in the extensions. The rein back was outstanding. The extended walk had two hooves overtrack and was active. In canter Fair Play RB lost a bit of her sparkle. The four tempi changes should have been more forward and ground covering and the pirouettes lacked some suppleness, but there were no major issues and it all looked very well established. The duo got 75.553% to win silver.

"It was so hot, my horse was not so motivated and I had a few little mistakes," said Nowag. "I'm very happy to have such a wonderful horse." German team trainer Oliver Oelrich added that, "her trot tour was even better than in the team test." 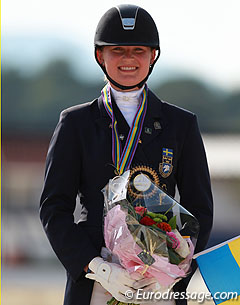 After a 14 year break from the individual podium, a Swede was again able to bring home a medal. Maria von Essen took individual bronze in 2001 and this year Marina Mattsson achieved the same. Aboard Patrik Hannell's chunky dark bay Swedish stallion Double Diamond II (by Don Primero x Romadour II) she made no mistakes. The licensed stallion was a bit slow behind and appeared tired in his trot but he remained very obedient and fulfilled the job for his rider. The trot extensions were lovely. The extended walk was ground covering and the collected had a clear 4 beat rhythm.  Double Diamond executed high quality canter work with good half pirouettes  in which the horse takes the weight on the hindlegs. The extended canter had good energy but the quality of stride was slightly lost before the flying change. All tempi changes were accurate but the horse swings the hindquarters to the right in each right change. The pair scored 75.289% to finish third. 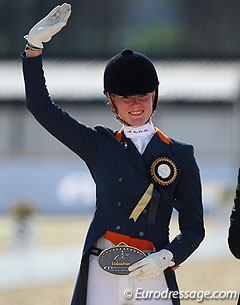 Mattsson had edged out Dutch Denise Nekeman on the 9-year old KWPN stallion Boston (by Johnson x Quattro B). The small black stallion is a pocket rocket with a super engine behind, a very high neck and a real show stopper with good looks.  The horse was one of the very few who appeared completely fresh and unphased by the hot weather, but a string of small inaccuries, mainly in the transitions, meddled with a higher score. The first halt and halt for reinback were stretched, the transition from trot to walk was too rolling, the transition from walk to canter was difficult and in the collected walk Boston jogged. The pair showed top half passes, especially the one to the right, and nice voltes, but overall lacked bending in all the corners. The extensions were excellent. While the horse executed good tempi changes and small pirouettes he lost the collection in the canter stride towards the end of the test and the final flying change was short. The duo scored 74.711 % to finish fourth.

"I'm so overwhelmed," Mattsson confessed at the press conference. "My goal was a medal but it's hard to beat Germany and The Netherlands. I'm so pleased I made it. My horse made no mistakes." 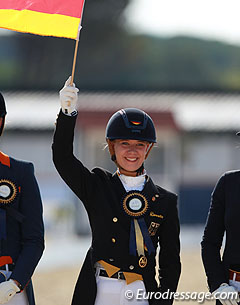 German Claire-Louise Averkorn and her 11-year old Hanoverian gelding Condio B (by Contendro x Willem's As) slotted in fifth. Averkorn's bay gelding is not the most spectacular mover and could have a bit more bounce and suspension in his gaits, but he is very obedient and correct in the execution of the movements. Averkorn presented her horse with much relaxation and soft in the bridle. The extended walk was lovely but the horse got lateral in the collected. The right pirouette was the best one and the tempi changes were all precise but the horse could not sustain a high level of quality in the canter stride throughout, maybe because of the heat. They scored 74.053%.