Schmidt and Imperio on German Team for 2015 CDIO Hagen 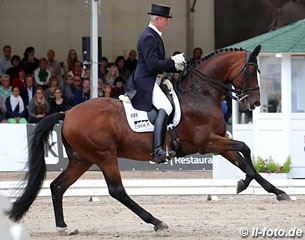 The 2015 German Dressage Championships concluded on Sunday 14 June 2015 with a kur competition in which a separate set of medals was to won. While the same trio of ladies got on identical places on the podium, Hubertus Schmidt and Imperio were the shooting stars of the event with two fourth places.

By finishing fourth in the technical part of the German Championship (Grand Prix Special), Hubertus Schmidt and the 12-year old licensed Trakehner stallion Imperio (by Connery x Balfour) made a strong impression. The pair confirmed form in the Kur to Music with a 79.775% score, shy from 80%, and obtained a spot on the German team that will compete at the 2015 CDIO Hagen, the final German team selection trial for the 2015 European Championships.

Whether Schmidt will actually get that highly coveted team spot for the Europeans in Aachen will depend on various factors: first of all he has to prove form again. Furthermore Totilas and Bella Rose are scheduled to appear at the event. If Totilas is able to score higher than Schmidt and stay fit for another month, chances are slim that the professional rider from Paderborn will actually get that team spot. However much can happen between now, 8 - 12 July, when the CDIO Hagen takes place, and 11 - 15 August when the Europeans Championships happen.

The dressage selection committee of the German Olympic Equestrian Committee selected Kristina Sprehe (Desperados), Isabell Werth (Don Johnson), Jessica von Bredow-Werndl (Unee BB) and Schmidt for the Hagen team. Bella Rose and Totilas will have to compete in the CDI-leg of that event.