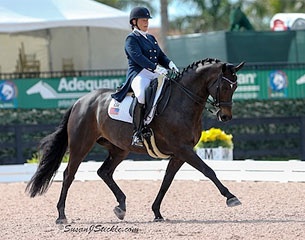 Robert Dover has announced the four European CDI's where the short listed U.S. dressage riders in the running for a team spot for the 2015 U.S. Pan American Games will be observed.

The American winter show circuit concludes this weekend with the CDI Rancho Murieta in California, after which the selectors and USEF High Performance Committee will meet to discuss and announce the short listed Pan Am riders based on their recent scores achieved.

Four Grand Prix combinations and four small tour pairs will be selected to travel to Europe for a May and June competition campaign. Evelyn and Klaus Haim-Swarovski's Schindlhof in Fritzens in the Austrian Alps has been picked as base for this Euro-Tour.

Between 14 May and 6 June the short listed riders have the option to compete at four possible shows: CDI Munich (14 - 16 May), CDI-W Lipica (22 - 24 May), CDI Aachen (29 - 31 May) and CDI Achleiten (4 - 6 June). Each rider has to compete at least at two shows with the Achleiten competition at Sissy Max-Theurer's castle in Austria as mandatory trial for all eight riders.

"The Pan American Games is an enormous priority because we understand it’s the berth for the Olympics," Robert Dover told U.S. equestrian journalist Betsy LaBelle. "But, consider that Canada at the World Equestrian Games had an average score of over 70% all at the Grand Prix level. I hope in the future there’s a better way to ensure that both our nations qualify.”

The results achieved at the euro tour will only be a guideline for U.S. Pan Am team selection. The team will be determined by the USEF Dressage High Performance Committee based on recommendations of the Selectors and chef d'equipe.

The 2015 Pan American Games, which takes place in Toronto, Canada, on 11 - 14 July 2015, is the only remaining event where the U.S.A can directly qualify a team for the 2016 Rio Olympics. It has to win team gold to obtain that berth.