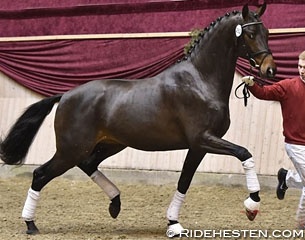 Twenty-five dressage colts were selected to participate in the 2015 Danish Warmblood Stallion Licensing in Herning in March 2015 following the pre-selection in Vallensbaek on 14 December 2014 and in Vilhelmsborg on 17 December 2014.

A collection of 54 dressage bred 2,5-year old colts was presented at the two pre-selection days. Twenty-seven of them passed after the hard surface face and 25 ended up being selected for the Licensing after the in freedom phase.

The selected dressage colts are: