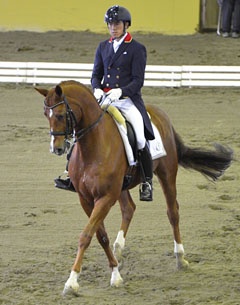 Normally the Japanese dressage championships are contested over two rounds, the Grand Prix and the Kur. Extreme weather conditions made the Gotemba show organizers change the schedule as very strong rain and wind hit the venue and made competition difficult. All classes were scratched and the Grand Prix was ridden on the kur day on Sunday 30 November 2014.

Hayashi, who is a two-times Japanese team member having competed at the 2010 and 2014 Asian Games, scored 64.500% in the Grand Prix with Peter Pan, a horse formerly owned and ridden by Beatriz Ferrer-Salat in Spain. Hayashi beat 2012 Japanese dressage champion Yuko Kitai on the chestnut Golden Coin.

This experienced duo Kitai/Golden Coin finished on a 63.940% score. Kitai's Golden Coin is a horse with a very interesting background. The Bavarian bred chestnut was originally called Wyatt Earp (by Weltrang L x Donnerhall), but when Dane Rawlins' sponsor bought him, his name was changed to Wily Earl. This same horse miracously popped up in Japan in 2009 after being sold through Germany as a Belgian warmblood with no listed pedigree, a different breed and three years younger than Wyatt Earp/Wily Earl.