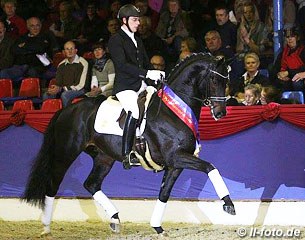 Grey Flanell became the 2014 Oldenburg main premium winner, an award bestowed on the 4-year old stallion with the best results and foal crop according to the Oldenburg breed society.

There are several factors that play a decisive role in the decision for awarding a main premium: the stallion’s development in sport,  his results at the stallion performance test and, above all, the quality of his first offspring at the inspections.

For dressage the prestigious main premium went to Grey Flanell, a Dutch bred colt by Gribaldi x Clavecimbel x Ferro, bred by the late A van der Goor and owned by Gestüt Bonhomme in Werder, Germany.

Already highly praised when he was licensed in Vechta in 2013, Grey Flanell was sold at auction to Gestüt Bonhomme for 72,000 euro. Here the talented colt developed nicely and drew a lot of attention when he finished fourth in the Pavo Cup in the Netherlands for 4-year olds as best performing stallion. Grey Flanell’s first crop was phenomenal. Nine of his foals were admitted to the 2014 Elite Auction in Vechta and every single one changed hands for five-digit sums.

Placing second in the main premium ring was the 2012 Oldenburg Licensing champion Follow Me (by Fürstenball x Donnerschwee x Alabaster), bred by Jürgen Fetzer and owned by Dressurpferde Leistungszentrum Lodbergen. He passed his 30-day test in Schlieckau with an outstanding score of 9.29 in dressage and an overall score of 8.32. Follow Me then proceeded to win the State Championships in the class for three-year old stallions at the Oldenburg State Show in Rastede.

Third place went to Belissario, born 2010, by Belissimo M x Sandro Hit x Langata Express xx x  Pik Bube I, bred by Aloys and Christian Hinxlage from Garrel and owned by Zuchthof Kathmann in Hausstette. Belissario took the 70-day test in Schlieckau which he finished with a score of 7.73 in dressage and an overall score of 7.71.