The 2014 World Equestrian Games Kicked Off with Spectacular Opening Ceremony 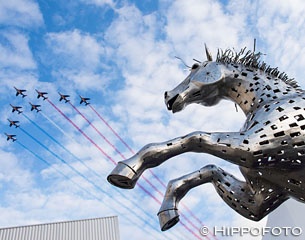 A parade of athletes from the 74 participating nations, an incredible musical and hi-tech lightshow extravaganza featuring over 100 horses, the Garde Républicaine and giant Mexican waves entertained a sellout crowd of 21,000 for the Opening Ceremony of the 2014 World Equestrian Games in Normandy at the D’Ornano Stadium last night.

Laurent Beauvais spoke warmly of the 3,000 volunteers that will be working at the venues to optimise the Games experience, and many of them had the opportunity to parade in front of the spectators as part of tonight’s ceremony.

Princess Haya, speaking in French and English, also expressed her gratitude to everyone involved in making the Games possible. “On behalf of everyone here tonight, and everyone around the world who will enjoy these seventh World Equestrian Games, I want to thank the people of Normandy for so warmly welcoming us to this beautiful region,” Princess Haya said.

“I also want to thank the World Equestrian Games Foundation, Alltech, and the many volunteers who have given so generously of their time and energy. These Games could not happen without you. And of course, I want to thank all of the athletes who have come to Normandy to pursue their dreams. You are at the pinnacle of our sport; you have earned the right to be here through your hard work and dedication. 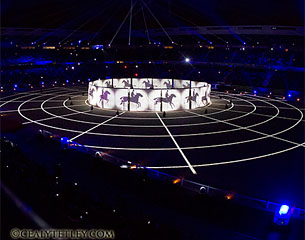 “Whether you win or lose, these Games are sure to be a highlight of your career. I am confident that you will represent our sport well and prove yourselves to be true champions. I wish you all the best of luck.”

Princess Haya then invited French Prime Minister Manuel Valls to declare the Games open, the first time in the history of the World Equestrian Games that there has been a Prime Minister at the opening ceremony.

French team member and former athlete representative on the FEI Bureau, Kevin Staut, and Anne Prain, President of the Ground Jury for Para-Equestrian Dressage took the FEI pledge on behalf of the athletes and judges.

On behalf of all the FEI officials, Anne Prain spoke of the spirit of fair play and integrity, while the athletes’ pledge was given by Kevin Staut: “In the name of all riders, I promise that we shall take part in the Alltech FEI World Equestrian Games 2014 in Normandy respecting and abiding by the rules which govern them, committing ourselves to our sport without doping, in the true spirit of welfare of the horse and of sportsmanship, for the glory of equestrian sport and the honour of our teams.”

A total of 478,000 tickets of the 500,000 on offer had already been sold before tonight’s Opening Ceremony, and with top sport across the FEI disciplines from now until 7 September, a fantastic spectator experience is guaranteed over the next 15 days!