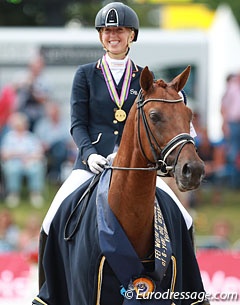 For 25-year old Dutch rider Kirsten Brouwer the 2014 World Championships for Young Dressage Horses in Verden became a fairytale when she won the bronze medal in the 5-year old division on Eye Catcher. That fairytle turned into an unforgettable experience today as the Brouwer won the 6-year old finals aboard the KWPN stallion Dancer. The pair was the only one to score an average above 9 and edged out Stephanie Dearing on Del Magico who claimed silver. Gerdine Maree on Dream Boy got the bronze.

The 6-year old finals are always a bit different from the 5-year olds. The youngest horses mainly earn their marks with their ground quality, training level and rideability. For the 6-year olds the quality of their flying changes as well as the collected walk are extra factors that come into play and tend to be decisive the final ranking. It was no different this year in Verden, where judges Maria Colliander (FIN), Andrew Gardner (GBR), Kurt Christensen (DEN) and Dietrich Plewa (GER) were on duty for the 6-year old finals. 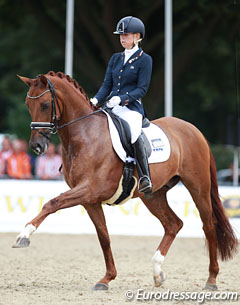 Brouwer and Dancer are a familiar pair. Last year they finished 9th in the 5-year old Finals, but the KWPN stallion (by Vivialdi x Tango) showed tremendous progress in his work and certainly was one of the stand-out horses in his age division this year. The stallion has an amazing trot with tremendous shoulder freedom and much elegance and lightfootedness. The horse was balanced and fluent in the lateral movements but should have shown more bending on either side. The extended walk had two hooves overtrack but could have been a bit more active and engaged. In the collected walk in between the pirouettes he lost the clarity of rhythm and became lateral. In canter the horse was uphill and engaged. The first and fourth flying change were good, the second one in two phases and the third a bit crooked. In the extended canter he could have taken more weight on the hindlegs.

Dancer scored 9.8 for trot, 7.8 for walk, 9.3 for canter, 9.0 for submission and 9.3 for general impression to average a winning 9.04 points. Plewa praised the horse for being "a very elegant, powerful horse with an elastic trot and a real secure rhythm." The walk was "not through the body." The canter was "uphill but in the extensions he needs more ground cover." The panel was quite mild on scoring the missed second flying change in the submission compared to some mistakes other horses made, but overall Dancer was a fair winner of the Championship and a deserved champion. Brouwer was on cloud nine with her gold and bronze medal harvest of the weekend. She was very realistic about the challenges that the flying changes pose to 6-year olds. "The test is hard for a 6-year old with all the flying changes," she said, "but Dancer did an amazing job. He did almost no mistakes, just one flying change, but he's young. Dancer's trot feels amazing to me. The walk is maybe not the biggest. It's a dream to ride a horse like that."

It was quite a surprising turn of events when Austrian Stephanie Dearing and the Pengg family's Hanoverian stallion Del Magico (by Dimaggio x Feinbrand) finished in the silver medal position at the end of the class. Dearing was lucky that she was drawn as penultimate rider to go, giving the judges ample opportunity to compare her ride with the other performances and weigh their marks carefully. Dearing's sympathetic grey stallion Del Magico is not very flashy in trot but he is extremely correct. He could have shown more self carriage without leaning on his rider's hands. This lack of balance showed in the trot extensions in which he became wide behind. The extended walk was ground covering but hasty, the collected walk was ok but not brilliant. In canter the horse got behind the vertical, especially in the collected canter but overall his strides were uphill. All flying changes were correctly executed but the third one was a bit lacklustre. Del Magico scored 8.7 for trot, 7.9 for walk, 9.0 for canter, 8.8 for submission, 8.9 for general impression and totalled 8.66 points. The judges praised the pair for being "a picture of harmony between rider and horse." They remarked that "the hindlegs needed to move more under the body in the trot extension" but in canter there was "a clear moment of suspension and capacity to collect."

Dearing won the first ever medal for Austria at the World Young Horse Championships. "I didn't expect it," said an overwhelmed Dearing. "I was here for the first time when Cherie was a World Champion (2001). Then I had a dream to ride here once. This dream came through on the first day I was here." Stephanie praised Del Magico for his rideability. "My horse was so with me on the first day. Today I was in a lucky position (to start) at the end. I knew several horses made mistakes and it would be better to have a clean test instead of having much expression." 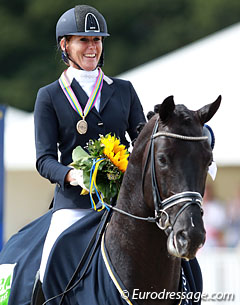 The winner of the preliminary test, Gerdine Maree on Tim Coomans' Dutch warmblood stallion Dream Boy (by Vivaldi x Ferro), landed a third place and the bronze medal. They were the last pair to enter the ring and produced a very strong, correct test. The judges took a long time to announce their results and it was very interesting to see where they had placed the horse. He could easily have finished second as well, but maybe Maree's decision to ride a safe clean test is exactly what missed for more glory.

Maree really rode faultfree with a very good first and final halt. The collected trot lacked a bit of impulsion and the half passes should have had more bending in the ribcage but the horse crossed the legs well. He slightly dropped behind the vertical on the volte right and right half pass. The medium and extended trot were conservative and Dream Boy could have shown more swing over the back. In general the trot was well carried and flowing but the horse should have been quicker from behind. In walk Dream Boy lost the 4-beat rhythm before and after the left walk pirouette. Dream Boy showed a very good balance in the counter canter and the flying changes were all big, but those to the left were crooked. The extended canter was nicely uphill.

The panel awarded Dream Boy 8.6 for trot, 7.8 for walk, 9.0 for canter, 8.9 for submission and 8.9 for general impression. They finished third on 8.64 points. They called him "a talented horse with a marvellous trot with good cadence. The extensions needed more overtrack." They praised Maree for achieving "a lovely contact" and good obedience. 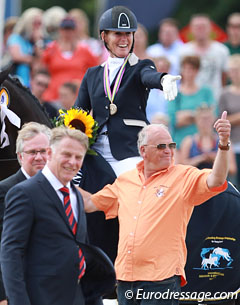 When asked if she wasn't disappointed for not winning gold, Maree revealed mixed feelings but then said, "coming here is always trying to be the best. I'm very happy with the result. The first day was a real surprise. There were only a few points between Kirsten and I. I'm really happy with him. It was a good ending." Gerdine described Dream Boy as "really beautiful. His character is great. Last year I was here as well. I had too much energy and he couldn't relax. I gave it proper training and time. It worked out, I was able to show it." Maree and the breeder and owner of Dream Boy, Tim Coomans, have been working together for 30 years so the bronze was a lovely reward for their longtime co-operation.

The judging in the 6-year old finals started out quite high at the beginning of the class, but then the panel became more strict before shooting back up. Judge Maria Colliander acknowledged this trend at the press conference. "It started very nicely. We were on good marks," said Colliander. "We said 'This is going to be a super final if everybody keeps improving like this.' Then it got more difficult, horses that were more tired. Then we really went up towards the end again with hugely talented horses, unfortunately with big mistakes.  There were very good horses, ridden and trained in a really nice way. For us the winner represented the most harmonious ride, even though there was one mistake in the change, it was a young horse mistake, he forget his hindleg. It was really nice after having some really sweaty moments." 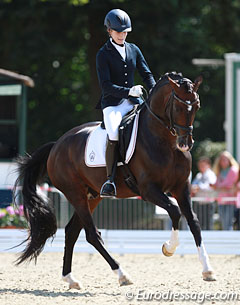 One of the combinations that benefit from high marks at the start of the class was Beatrice Buchwald on Manfred Hödl's Westfalian stallion Den Haag (by Diamond Hit x Florestan). The duo only qualified for the finals by finishing third in the consolation finals. Buchwald did a good job presenting the dark bay stallion, but he's not the flashiest mover. The trot was often unbalanced and Den Haag literally leaned on his rider for support and stability. The self carriage needs more improvement. The extended walk was very nice, but there was a slight loss of rhythm in the collected walk. Den Haag has a nice canter, but he got bum high in the extensions and was quite short in the neck. Two flying changes were huge, the other two were late to the aids. Overall in canter Den Haag is actively striding and it's his best gait. The judges scored the horse 8.4 for trot, 9.2 for walk, 9.0 for canter, 8.0 for submission and 8.5 for general impression. They averaged 8.62. The panel thought the walk was the highlight gait due to it being "secure in the rhythm."

Danish Stine Doesing and the dark bay Danish warmblood mare Lehmanns Lilo (by De Noir x Midt West Ibi Light) were fifth with 8.56. The dark bay, Thoroughbredy mare was generously scored. She stood out with her rideability and obedience and produced four beautiful flying changes. The mare has a very crooked right hind leg that moves out from under the body, especially visible in trot and in the unbalanced left half pass. Still she is lightfooted in the gait but hollowed her back in the extensions and came too much in front of the vertical. The mare has a big canter but could be a bit rounder in the gait. She was very forward in it and it would have been nice to see her a bit more collected. The judges gaves her 8.6 for trot, 8.8 for walk, 8.4 for canter and submission and 8.6 for general impression. 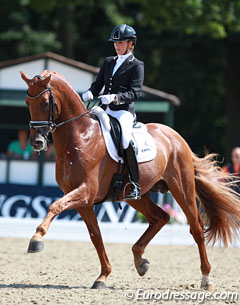 Emmelie Scholtens and last year's bronze medalist Dorado (by Krack C x Rousseau) produced a beautiful test that earned them 8.48 points and a sixth place. The combination could easily have placed higher. The tall chestnut stallion showed a wonderful trot with lots of crossing of the legs in the half passes and decent extensions. The half pass left was slightly unbalanced and overall the horse could have the nose a bit more forward even though he was more open in the throatlatch than most of Scholtens' horses. The extended walk had good relaxation and two hooves overstep, but could have been more active. The canter was engaged and uphill, but the horse should carry more from behind. All flying changes were ground covering, but the third one was crooked. The horse did get tense before every single flying change. Dorado does not have the strongest hindleg but he showed great willingness to work. He got  8.9 for trot, 8.2 for walk, 8.6 for canter, 8.2 for submission and 8.5 for general impression.

Text and Photos © Astrid Appels - NO REPRODUCTION ALLOWED (NO FACEBOOK/INSTAGRAM)

Eurodressage's Astrid Appels was on the scene taking photos of all WCYH riders and several Grand Prix riders in Verden. Contact us if you are interested in photo prints, digital images, collages or albums.