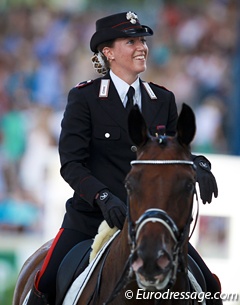 The Italian Equestrian Federation (FISE) and its head of the dressage department, Laura Conz, have announced the team that will represent Italy at the 2014 World Equestrian Games in Caen, France, on 25 - 29 August 2014. Italy will be sending a delegation of four riders but has not yet announced a team alternate.