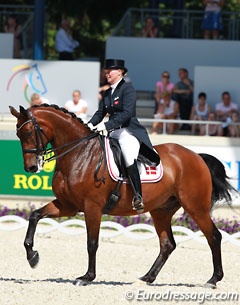 The Danish Equestrian Federation is not showing its cards and announcing a WEG team after Aachen. However the federation has revealed a long list of eight combinations which are still in the running for team selection for the 2014 World Equestrian Games in Caen, France, at the end of August. The team will be announced on the deadline date of 14 August 2014.

The long listed pairs for Denmark are:

A very surprising entry on the long list is Nathalie zu Sayn-Wittgenstein with the 17-year old Danish warmblood Digby (by Donnerhall). Zu Sayn-Wittgenstein retired Digby from team selection at the 2013 European Championships in Herning. The horse was honoured in a special retirement ceremony in which Natalie told the sell-out crowd in the stadium that Digby would no longer be available for the Danish team. Zu Sayn-Wittgenstein has now come back on her own words. The Danish Equestrian Federation announced that Nathalie has accepted their request to be submitted to the long list after good performances in Doha and Falsterbo.

"My intention has always been to do a few competitions this year, enjoy him and enjoy nice shows, as long as I felt he is enjoying it," Nathalie told Eurodressage. "My choice to go to Falsterbo came long before the federation made it a part of the selection. He went very well and, most importantly for my decision, he felt great. He had power, willingness and there was room for more.  So when Kimi and Rudolf asked me, I considered and agreed."