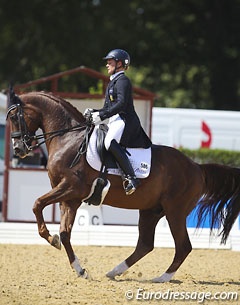 Her own and Bev Edwards' Hanoverian gelding sustained an acute injury one week prior to the first Australian selection trial in Fritzens at the beginning of July.

"Equestrian Australia were extremely accommodating within the discretionary consideration capabilities of our selection policy and granted me permission to try to rehabilitate his injury in time to start at the second selection event scheduled in Deauville next weekend," Beresford explained. " My team and I have worked tirelessly over the past 3 weeks and Basti has made very good progress and returned to training in a good way, however, I feel that it is all too soon to compete and ride with full power at top level so I have made the decision to withdraw from contention for the Australian Team."

After the first WEG qualifier, Mary Hanna (on Sancette) is currently in the lead for team selection. She is followed by Kristy Oatley (Ronan), Brianna Burgess (La Scala) and Lyndal Oatley (Sandro Boy).