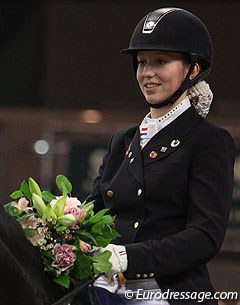 Shortly before departure to the 2014 European Junior Riders Championships in Arezzo, Italy, on 9 - 13 July 2014, Dutch junior rider team member Jasmien de Koeyer dropped out of the team. Reserve Marjan Hooge is stepping in to replace her.

Jasmien, who finished fourth with Take it Easy in the 2014 CHIO Cup Finals last week in Rotterdam, has been forced to withdraw from the team as her Florestan I son is not fit enough to compete. De Koeyer was member of last year's silver medal winning Dutch junior team at the Europeans in Compiegne.

First alternate Marjan Hooge and her black 10-year old Rhinelander stallion Fulltime (by Fidermark x Rosenkavalier) is taking her spot on the team.