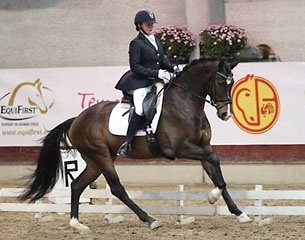 Belgium is the first country to announce the horses that have been selected to represent the nation at the 2014 World Championships for Young Dressage Horses in Verden, Germany, on 6 - 10 August 2014. Based on the performances and scores of the horse at five selection trials between April and June, the Federation nominated four horses and two reserves for Verden.

The 5-year old reserve is Earl Scandic (KWPN by Scandic), owned by Paulette Doyen and ridden by Leopold Engelen.

The 6-year old reserve is All Inclusive (Rhinelander by Abanos), owned and ridden by Laurens Vanderbeeken.