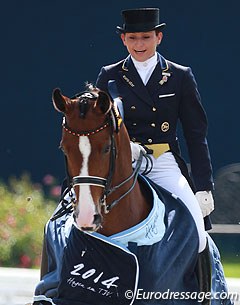 The German Equestrian Federation and junior/young rider team trainer Hans Heinrich Meyer zu Strohen have made their selection of the teams that will represent Germany at the 2014 European Junior and Young Riders Championships in Arezzo, Italy, on 11 - 15 July 2014. The team selections were announced on the last days of the second German observation trials at the 2014 CDIO-PJYR Hagen.

The German junior and young riders had to compete at two mandotary selection trials to be considered for the team. The first one was at the Preis der Besten in Warendorf in May and the second one was this weekend at Future Champions CDIO-PJYR at Hof Kasselmann in Hagen.

The selected German teams include:

The junior reserve is Franziska Schwiebert on Hogholm's Facel Vega

The young rider reserve is Vivien Niemann on Cipollini.