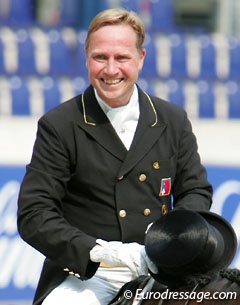 In an interview with Pferdonline, Swiss Grand Prix rider Christian Pläge provided more information about his sudden resignation as Swiss team trainer and the current upheaval within the Swiss Equestrian Federation.

Last weekend Christian Plage and Swiss Grand Prix chef d'equipe Jean Michel D'Arcis both resigned with immediate effect from their positions at the Swiss Equestrian Federation.  At the time, neither wanted to comment but Pferdonline was able to touch base with Pläge.

"I"m a practical person, not used to official thinking," Plägeexplained. "I'm practical minded and I see my position as the training of rider and horses. My task is to provide a good foundation for Swiss dressage in the long term. The possibilities for the riders need to become bigger, not smaller."

As guest country of the 2014 CHIO Aachen, the Swiss dressage team was given extra starting places at the show in July. Besides one rider for the CDIO tour, Switzerland was now allowed to send an additional two for the CDI tour. The Swiss Equestrian Federation, however, decided not to send two CDI riders.

"You have to understand that to get an invitation to Aachen is almost the same as qualifying for the World Championships. It's incredibly difficult to even get a foot in the door," Pläge stated. "Now we had the possibility to nominate two more riders for the CDI tour. There was no question about Marcela Krinke's spot on the CDIO tour. So we now were able to nominat two extra rider.. but then this has been blocked by certain persons. It would have been negative for us. We wanted to send two experienced pairs. There is no sensible argument not to do it, especially because the European Championships are in Aachen next year. We want to be there too."

When asked if the job of sport chef is an ungrateful one, Pläge replied: "When everything goes well, it's not an ungrateful job. I always try to give equal treatment to all riders. I always try to be neutral. But when some people only think 'you scratch my back, I'll scratch yours' and without good arguments put obstacles in the way, than it's a difficult job. Maybe in two or three weeks I can give more detailed statements. At the moment I'm still very emotional."

Read the full interview in German at Pferdonline.ch