Sonke Rothenberger Back in the Dressage Ring with Cosmo 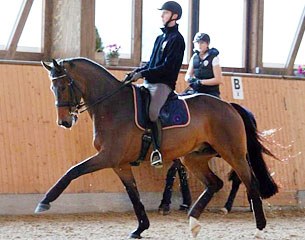 German former European pony champion Sönke Rothenberger seems to be turning back to dressage and might be venturing out in the dressage competition ring more regularly with a horse he holds close to his heart, Cosmo.

The 19-year old student of International Business Administration (B.Sc.) at the Frankfurt School of Finance and Management made the switch to show jumping in 2010 after a very successful pony career aboard Deinhard B. Even though Sönke had a junior rider's horse lined up in Wolke Sieben, the young adult looked for a bigger thrill in the obstacle course. Between 2010 and 2013 he jumped with Kid Gentleman, Vandaan T, Liza Minelli and Aperol.

However, in 2013 Sönke made a come back to the dressage ring aboard the then 6-year old Dutch warmblood gelding Cosmo (by Van Gogh x Fruhling), which the Rothenberger family acquired from breeder S. Serrarens in The Netherlands in 2012.  Sönke and Cosmo did a few M-level tests that year and have now kicked off 2014 in style with a first S-level victory.

This week, Rothenberger and Cosmo won a Prix St Georges at a regional show in The Netherlands. "He was very awake in the warm-up, as usual," Rothenberger explained. "In the test there were a few small mistakes but he was very obedient and we were able to win it with 67%."

Rothenberger had to borrow tails for this Dutch show, but the success made him taste for more. A tailor-made jacket is now on its way so one can expect to see Sönke more often in the dressage arena.