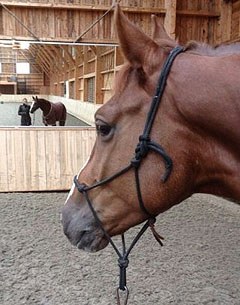 Hexagons Fusion is a 2010 born KWPN registered stallion by Rubiquil out of keur mare Welkom (by Krack C x Cocktail). He was previously owned by Leunis van Lieren in partnership with Stable Zegwaard.

"I tried him December and we bought him right before the VSN Trophy Finals," Jessica Michel told Eurodressage.

Michel disclosed that on the try-out she felt an instant click with the horse. "As soon as I sat on him I felt great straight away. It didn't feel like I was riding him for the first time. He's very talented, easy to handle, has outstanding hind quarters and a great capability to collect."

Michel said that they decided to allow Thamar Zweistra to compete in the 2014 VSN Trophy Finals after they had bought the gelding. "We wanted to give her the pleasure to ride him one last time. Thanks to his rideability, which was appreciated by Patrick van der Meer (guest judge rider int he Finals), he was able to bring home the victory."

Fusion has already arrived at Haras de Hus in Petit Mars, France and has settled in well. "He goes into the paddock every day and is on a light training schedule which he earned after winning the title," Michel explained. "We believe in Fusion's potential for top level and the goal is to take him there slowly."