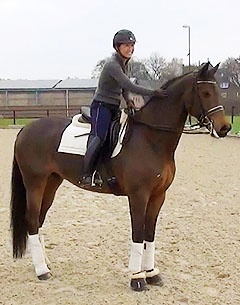 The bay gelding is gifted for the upper level work and is already schooling piaffe, passage, tempi changes every two strides.

"In 2011 Steffen got Legolas as his Christmas present and this year he got Rosamunde as his birthday present, so it was my turn to give myself a Christmas present," Yamazaki told Eurodressage.

Akiko deliberately invested in a younger, talented horse as she has several confirmed Grand Prix horses already. The sale happened via Joachim Arl, who kept Chopin at Henri Ruoste's yard in Germany.

"My show horses are getting a little older, with the youngest one being 14 next year. This time, I wanted to have a younger horse that I could grow together with although Chopin is very advanced in his training for a 6 year old horse," said Akiko.

The horse flew from Amsterdam to L.A. on Wednesday 18 December 2013.  Chopin will be briefly trained by Steffen and then move to Akiko's Four Wind Farms in Woodside, CA, where she will pick up the reins herself.

Akiko is an accomplished amateur Grand Prix rider herself. At the 2013 U.S. Dressage Finals in October, she also became the first recipient of the Janine Westmoreland Malone Perpetual Trophy for winning the Prix St. Georges Adult Amateur Championship on Matrix.