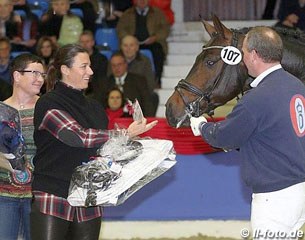 Each year the Oldenburg Althengst Parade offers an interesting presentation of Oldenburg licensed and approved stallioms from novice to Grand Prix to the eager crowd of breeders and dressage lovers that attended the Oldenburg Stallion Licensing. The 2013 edition took place on Saturday afternoon 23 November at the OL head quarters in Vechta, Germany, and especially the young stallions shone at this  exhibition.

For years the Oldenburg organisation has been playing with the format, schedule and time span of the Althengst Parade. In the past it used to be a never-ending, fatiguing marathon. The format became more abbreviated after strong demand from the crowds which already sit through three days of non-stop licensing. A couple of years there were also a few renowned stallions presented by not so famous and quite unflattering riders and last year one ambitious ridier was squeezing the Grand Prix out of a 6-year old while another "famous" State Stud rider thought it necessary to ride a 5-year old in a double bridle. Those presentations generated dislike from many attending. But the Oldenburg society is always looking to improve and this year the format was just right! There was a good collection of quality stallions which were presented in the proper way! 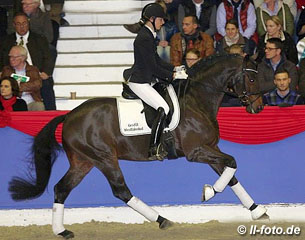 Two stallions, which we anticipated to see under saddle, were absent from the Althengst Parade: the 2012 Oldenburg Licensing Champion Follow Me (by Furstenball x Donnerschwee), who is doing the Stallion Performance Test in Schlieckau, and the 2011 Licensing price highlight Tomahawk (by Temptation x Sandro Hit x Master), who only appeared in hand during the Haupt Premium award ceremony in which he placed second before 2011 Licensing Champion For Romance (by Furst Romancier x Sir Donnerhall I). Don Frederic (by Don Frederico x Wolkentanz I) was a no-show for the Haupt premium and Bon Bravour (by ) was entered to appear in the Parade but was not presented.

The first young star horse in the Althengst Parade, which appealed to the imagination, was the very compact dark bay Hanoverian Dantano (by Diamond Hit x Brentano II). The bay is quite ponyesque with its short back, big neck and cute look, but he has a stunning hind leg. Especially in the canter the hind legs always reached far under the body, taking up the weight so the horse could move with an uphill tendency (even though the gait was somewhat unbalanced). The walk was outstanding as well and in trot the dark bay showed much spring and elasticity. 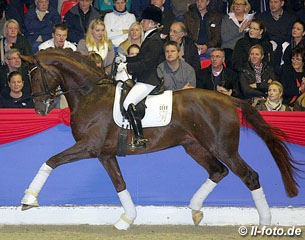 The champion of the 2013 Oldenburg Under Saddle Licensing, Best of Gold (by Belissimo M x Diamond Hit x Ex Libris) was another head-turner. The tall liver chestnut stallion looked gigantic with his petite rider on top. The 4-year old moved with much power from behind, his hindleg mechanism typical for a Belissimo offspring, and was always up in front with a gorgeous front leg. In trot the horse took many uneven steps due to an unsteady contact with the bit and the rider trying to engage the horse even more. The canter was decent, though the stallion could take more weight on the hindquarters. His walk was ok with much ground cover but he was a bit quick in the tempo, which meddled with the rhythm.

The 4-year old Dutch bred Elton John (by Jazz x Fidermark x Cocktail) left a very good impression, especially in trot in which he moved through the body and with a functional, engaged hind leg. In canter the hindlegs were a bit out. The walk good but not breath taking. The 4-year old chestnut Quotenkonig (by Quaterback x Furst Piccolo) excelled with his bouncy and cadenced trot. He is quite short in the neck. In walk the rhythm and ground cover were good, but like most Quaterback offspring the self-carriage by taking more weight behind should improve. 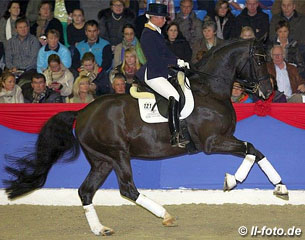 The 6-year old Oldenburg bred Dante Weltino (by Danone I x Welt Hit II) gave a very solid performance with good hind leg activity in trot, much scope in canter and a superb walk, but the back could move the hind legs a bit more towards the point of gravity in general.

Under Portuguese Antonio do Vale, the 11-year old Westfalian licensing champion Fidertanz (by Fidermark x Ravallo) produced a proper round in which the big, uphill tempi changes were the highlight. Fidertanz' 5-year old offspring Franziskus (by Fidertanz x Alabaster) had more problems coping with the electric atmosphere in the indoor arena. The dark bay was unable to show a proper walk, but he executed great trot extensions. In the collected trot he lost some flair, but the compact stallion made up for that with a powerful canter. Franziskus' hindleg is not the most powerful but it's willing to work and make an effort to engage. 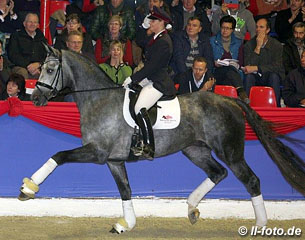 While some of the stand-out movers were quite short in the back, the Hanoverian bred Belantis (by Benneton Dream x Expo'se) has more frame and looks like a really talented, complete dressage horse. The 4-year old grey stallion coped extremely well with his environment and was cool as a cucumber. He has a phenomenal front leg and a very decent hind leg. In the canter he is active and quick behind and in walk he covers much ground while keeping a clear 4-beat rhythm. Overall his movements could be more uphill oriented, but Belantis is definitely one to watch in the future!

While Licotus (by Likoto xx x Donnerhall x Balou) is a stallion which gets very little attention or publicity he always does the job at the stallion parade! The gorgeous dark bay half-blood is S-level trained, has a lovely piaffe and passage, and is a very graceful mover. His son Lexicon (by Licotus x Davignon II) underwhelmed with a mediocre self carriage, but the bay 5-year old has a very good walk. 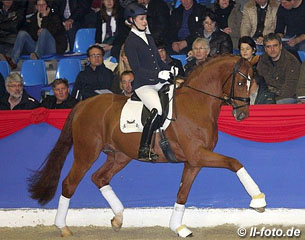 Breatrice Buchwald presented her 2013 Bundeschampion Lord Carnaby (by Lord Loxley x Rocket Star). The bright chestnut mainly impressed with his high quality training and suppleness in the half passes. The stallion has a brilliant front leg, works from behind but could be quicker. The flying changes were uphill. He was a bit tense in the walk though, mainly because of the atmosphere.

The almost full Thoroughbred Mighty Magic (by Mytens xx x Heraldik xx x Lavall I) was young horse eventing World Champion as a 7-year old. He is now being marketed as a dressage stallion. The bay with the big neck left a very sympathetic impression and had three solid basic gaits, including a good walk. The evening ended with the appearance of some F-blood. Kira Wulferding presented the very sporty For Romance (by Furst Romancier x Sir Donnerhall I), who appears to be much softer in the mouth than most Furst Romancier offspring. The very elegant and modern stallion has much elasticity and a hind legging willing to carry weight and move under the body.

The last horse to appear in the ring was the 7-year old Furstenball (by Furst Heinrich x Donnerhall) who was celebrated as the "VTV Dressage Stallion of the Year". Presented by Ines Westendarp, Furstenball showed that he is well on his way towards Prix St Georges and he displayed a few promising passage steps. He is supple and elegant in trot and world class in walk. He was solid in canter, although his hind leg could reach more under the body in each stride.