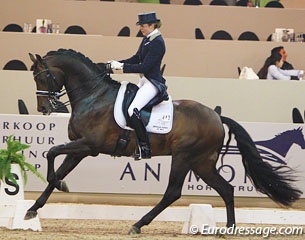 The bay Dutch warmblood licensed stallion Apache (by UB 40 x Inspekteur) will be the best represented sire at the upcoming KWPN Stallion Licensing pre-selection days with no less than 29 offspring vying for a ticket to particpate in the 2014 KWPN Licensing in February.

The KWPN society has posted the schedule for the pre-selection days starting 4 December with the jumping candidates. The dressage colts are up for pre-selection on 11 - 14 December 2013 with one "late pre-selection" day on 20 December 2013. The actual licensing itself takes place on 5 - 8 February 2014 at the Brabanthallen in 's Hertogenbosch.

Apache is best represented with 29 offspring entered to appear at the pre-selection days. The KWPN performance test winner Charmeur (by Florencio x Jazz) will present his first crop at the pre-selection and has 21 colts appearing. Jazz and Uphill both have 14 sons entered, Bretton Woods 12, Bordeaux and Andretti 10 and Bojengel 8.  Grand Prix stallion Tango has 7 sons entered and Chippendale, Totilas, Wynton and Vivaldi each have 6 offspring lined up.